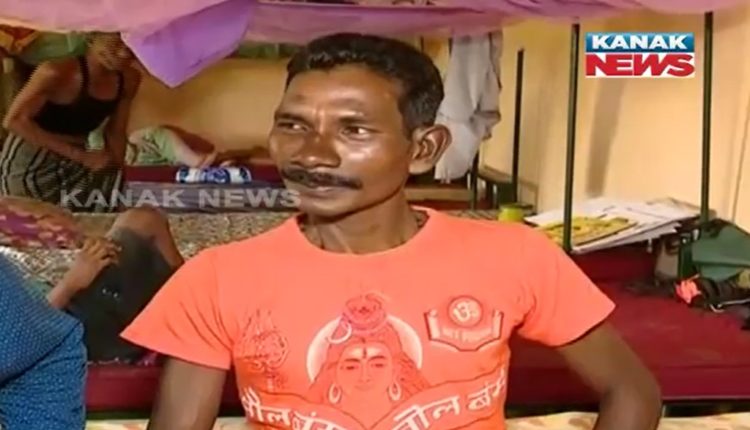 Puri: Sea adventure might be the most interesting fairy tale narrated by grandma. But, the struggle for survival without food and water after being lost in the deep sea could only be described by a storyteller, who is the true protagonist of the survival episode.

Here’s the man from Andaman whose 28-day long struggle in the sea against all odds reminds of the sea adventure of Pi Patel, a character in Golden Globe Award and Oscar Awards winning 2012 Hollywood flick ‘Life of Pi’.

Amrit Kujur alone kept his spirit high and survived on sea water for 28 days till he reached shores in Odisha. Even death of his aide in front of him on the boat failed to break him from inside.

Along with another person Divyaranjan, the 42-year-old man had sailed on the boat from Port Blair to the Neil Island, which has been renamed as Shaheed Dweep of Andaman and Nicobar, on August 28 to sell grocery and food items to other ships.

However, their boat got stuck in rough sea due to a strong storm between their destination and harbour. As the fuel of the boat was exhausted, they had to throw their wares into water to reduce weight of the vessel. Due to strong wind, they drifted to Myanmar (Burma) and again headed for Andaman after receiving assistance from Burmese Navy. However, the trouble was not over yet. The tragedy began when Kujur once again experienced similar situation and lost his aide midway.

“We had ventured into the sea on a cargo trip on August 28. Barely one-and-half hours after leaving the harbour, our boat was stuck in the sea due to a storm. There was no fuel in the boat and we lost direction. We threw all the articles from the boat except food items. The vessel floated on the water and reached Burma in 15 days, where a fishing boat extended help by providing 40-litre fuel and cooked rice. They showed us the direction to arrive at Burma coast, where a Navy ship provided us hospitality for two days. On third day, they made arrangement for our departure from the coast to India. The ship filled our boat with 260-litre fuel and we headed for Andaman with a compass,” said the fortunate Andaman man, who escaped from the clutches of death, while narrating his ordeal.

The trouble began midway as the boat ran out of fuel and the duo became directionless again. Without food, the two survived on the boat by consuming only seawater, which develops dysentery and vomiting. No cargo ship came forward with helping hand for the two in distress.

“We wandered in the sea for days. We approached many cargo ships, but failed to receive assistance,” Kujur expressed.

During the period, he lost his aide and survived alone on the boat with nothing.

“My aide died without food and water. Staying with the body for two days on the boat, I threw it into the sea after the body started decomposing. I was at the mercy of God and survived with seawater,” he said.

Finally, the Andaman man arrived at shores of Khirisahi village in Chilika on October 25. He was rescued by villagers after his boat turned turtle. On receiving information, Krushnaprasad police reached the village and provided him all sorts of assistance.

“I am fortunate to have reached Puri coast. As I was hungry, I climbed a coconut tree and consumed coconut water. While walking some distance on the shores, I found cow dung lying on the ground. Then I was confirmed about presence of a human habitat here,” Kujur said.

He was proved lucky for fourth time to have escaped from death on his voyages. However, the survivor made it clear that he will never sail on the boat in future.

“After returning to home, I wish not to continue this work in the sea anymore, as this is the fourth time I survived in the sea,” he added.