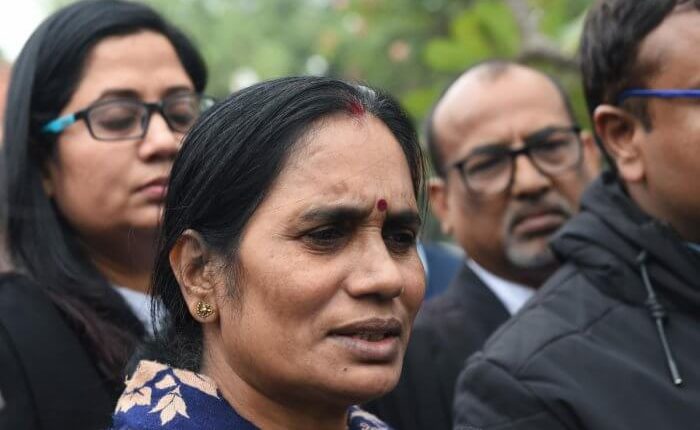 New Delhi: As news of hanging of her daughter’s four rapists flashed on the TV screen, Asha Devi heaved a sigh of relief, hugged her loved ones, held back her tears and with a voice heavy with emotion said that the sun will rise on Friday with new hopes for daughters of India.

The curtains came down at 5.30 a.m. when Akshay, Pawan, Vinay and Mukesh of the six men, who brutally raped a Delhi student on a moving bus on a winter night in December 2012, were finally hanged to death.

Nirbhaya’s mother and father have been fighting an ending legal battle to see their end for seven long years.

Speaking to IANS, Asha Devi said, “Justice has been delivered today. Four convicts have been hanged till death. Today’s rising sun is dedicated to the daughters of this country.

“Not only Nirbhaya, but the entire country that was shaken to its core on that December 16 night in 2012, was delivered justice.”

She has waited with baited breath to see the day when finally her daughter’s rapists would be hanged, and Asha Devi could not contain her satisfaction when the confirmation of hanging of four convicts in the gang rape and murder case came in a little after 5.35 a.m. on Friday. A little after 6 a.m. the doctor confirmed that her daughter’s attackers were dead.

Speaking to the throng of media personnel waiting outside her residence, Nirbhaya’s mother Asha Devi said that her faith in the judiciary had been vindicated.

A visibly relieved Asha Devi said that the hangings of the four convicts would send a strong signal for deterrence. “Our fight for security of daughters across the country will continue” she said.

“I returned from the Supreme Court, hugged my daughter’s photograph and told her: ‘Today, justice has been delivered’.”

“I dedicate this day — March 20 to all the women in the country because #Nirbhaya got justice, today,” she said.

She said: “Proud to be known as Nirbhaya’s mother. She fought so hard. And I have waited long to see this day. The flaw in our justice system were exposed. But finally all four were hanged in one go. A first of its kind of justice, which will definitely be a lesson to others.”

“Will continue this struggle for other daughters in the country,” she said and remembered all the unfulfilled dreams of her child, whom she could not save.

Nirbhaya’s father too expressed satisfaction at the turn of events, which have been escaping from their grasp for — justice have been slipping through their fingers as the convicts had made every last ditch attempt to escape the gallows.

“I’m happy and the entire community is happy, the country is happy toady as justice has been delivered,” said the father and expressed his gratitude to all — media, Nirbhaya’s friends, people who have fought long and hard alongside his wife and him, the protesters who took out candle marches. He thanked all for making it happen.

Friday morning’s hanging of the four convicts brought to an end the seven year quest for justice by the parents of the young girl who was brutally gang raped by six persons in Delhi, in December 2012.