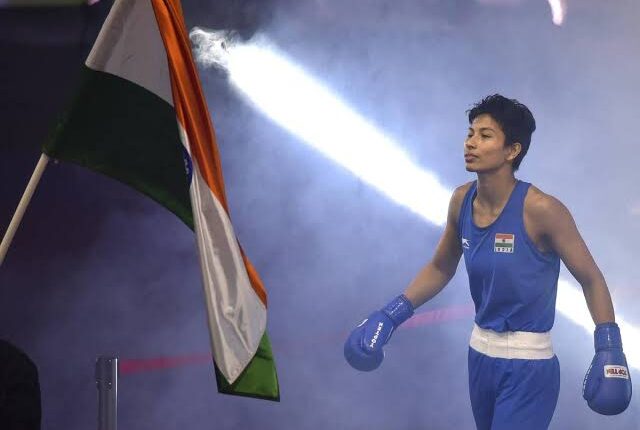 Tokyo: A week ago, Baro Mukhia village in Assam’s Golaghat district had connectivity with the world through a muddy road. Now, people in the state are working hard to turn the road into a concrete one.

Thanks to Lovlina’s bronze medal in the welterweight category at the Tokyo Olympics, the village is now getting those things which they have been deprived of in the past.

The 23-year-old Lovlina, who started with Muay Thai, a form of martial arts, lost her semifinal bout to reigning world champion Busenaz Surmeneli of Turkey at the Tokyo Olympics on Wednesday.

It was a bout where Busenaz out-boxed Lovlina. But the Assamese boxer had already got her name in the list of Olympic medallists from India after defeating Chen Nien-Chin of Chinese Taipei in the quarterfinals.

“I don’t want to stop on bronze. I want to go for the gold. Medal is only one. That is gold,” Lovlina had said during the media interaction last Friday. Though she failed to go for gold, Lovlina became the third Indian boxer to be on the Olympics podium after Vijender Singh and MC Mary Kom in 2008 and 2012 Olympics, respectively.

Lovlina’s journey from Baro Mukhia to Tokyo has been inspiring. She has managed to get her way through various obstacles to win a medal at the Olympics.

Growing up in the village, Lovlina would initially get into practicing Muay Thai, following in the footsteps of her twin sisters Lima and Licha.

It was only the sight of boxing coach Padum Boro in 2012 which saw a huge shift in Lovlina’s life. A few months later, the Sports Authority of India (SAI) held trials at Barpathar Girls High School, where Lovlina studied. She got a chance to show her skills in the trials and got selected as a trainee in Guwahati.

Boro noticed her exceptional talent and began to hone her skills. Boro, who worked at Sports Authority of India’s Shillong and Dimapur centres, introduced Lovlina to boxing. From there onwards, there has been no looking back for Lovlina.

In her journey to reach the podium at the Olympics, she battled the patriarchal mind-set of the society, overcame the battle against COVID-19 and worries about her mother Mamoni’s kidney issues.

Now with the Olympics bronze medal, Lovlina has the licence to go high after a long journey to the podium at Tokyo.