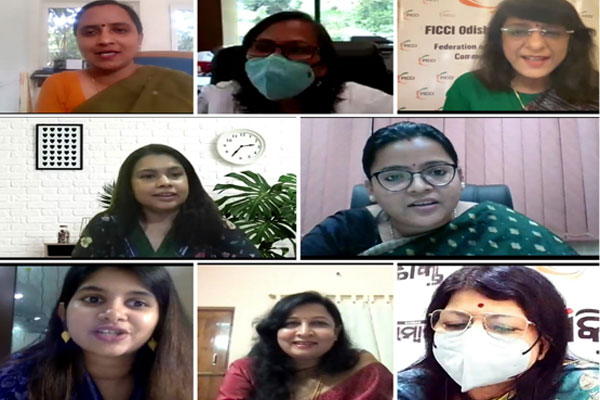 Bhubaneswar: IPS Rekha Lohani, Additional Commissioner of Police, Bhubaneswar-Cuttack Twin City as chief inaugurator opened the inaugural address at sixth virtual roundtable of FICCI Odisha Council today. She said that the confidence level among the women entrepreneurs and women members of Self Help Groups (SHGs) is gradually beaming as they are turning financially independent. She also narrated about several steps the Police department is taking to ensure the safety of women, children and senior citizens in these testing times. Some of those are setting up women and child helpdesk in every police station and appointing nodal officers in several areas in the Twin City to watch over the wellbeing of senior citizens residing there. She concluded her session with an assurance — “venture into any field and we’ll be there to provide you a protected environment.”

IAS Sujatha Karthikeyan, Commissioner-cum-Secretary, Mission Shakti, Govt of Odisha graced the first-ever all-women roundtable as the chief guest. She gave a brief idea about various activities that Mission Shakti is carrying out to ensure skill development and financial independence of as many as 70 lakh women across the state under Chief Minister Naveen Patnaik’s government. With that, she said that the Government is also planning to soon double the total fund allocated for state’s women entrepreneurs from Rs 4000 cr to Rs 8000 cr.

Till date, many women have been employed as bank correspondents in several rural areas to ease bank-related issues of the local residents. The plan of establishing Mission Shakti Markets in various places including Bhubaneswar, Jajpur, Balasore, Rourkela and Berhampur, is also on cards. Further, a Mission Shakti app has been introduced to provide assistance and digital training to women entrepreneurs and SHGs to enhance their work output, narrated Karthikeyan.

“Empowerment has to be holistic. Mission Shakti aims at giving women their independent identities and voice,” Karthikeyan emphasised.

Suma Devi Dash, Director-Finance, Ashwini Hospital, talked about the importance of creating a flexible environment for women in workspace, instead of just including them in male-dominated work fields. Now that the COVID-19 pandemic has made everything fragile, it’s quite necessary for women to hone their skills and utilize them to become financially independent. For that, all they need is confidence, she added.

Rashmi Sahoo, Director of Ruchi Frozit Division, narrated how women employees in her firm are not just using their culinary skills but also enthusiastically training in the firm’s technical and management fields.

Tanaya Patnaik, Executive Director of Sambad Group began by appreciating the hard work of the women of the Mission Shakti family. Girls from the urban areas need to learn a lot from women from rural areas, she said.  She also talked in brief about the importance of digital and financial literacy in the current society.

Professor Sasmita Samanta, Pro Vice Chancellor of KIIT University and Vice Chancellor of KISS (deemed to be University) talked about the importance of financial and moral empowerment of rural women SHGs and suggested that in the years to come, Mission Shakti might become one of the biggest brands in the supply chain.

The meeting closed with concluding remarks and vote of thanks by Baijayanti Kar, ODISHA50 Team Leader and DGM-HR, Sambad.

With 6 spinners in Sri Lanka, 3 in England, India face problem of plenty