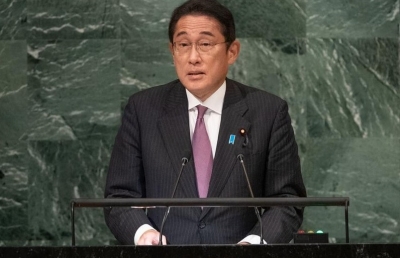 United Nations: Presidents of three countries of the G4, supported by other leaders, have called for renewed efforts to reform the Security Council and make it more efficient and representative of today’s world.

Along with India, Brazil, Germany and Japan form the group known as G4, which advocates for reforming the Council and mutually support their candidacies for permanent seats in an expanded Council.

Brazil’s President Jair Bolsonaro, who was the first national leader to speak at the start of the General Assembly’s high-level meeting on Tuesday, said that “in the specific case of the Security Council, after 25 years of debates, it is clear that we need to look for innovative solutions” for reforms that are stalled.

Referring to the intractable problem of the reform process stopped from adopting a document to move the negotiations forward, Japan’s Prime Minister Kishido Fumio said: “The time has come for text-based negotiations to reform the Security Council.”

Making the case for expanding the Council, Chancellor Olaf Scholz of Germany said that “the up and coming dynamic countries and regions of Asia African south and America must be given a stronger political voice on the world stage”.

At least six other leaders who spoke on Tuesday joined the call for reforms, even if some like those of Italy and Turkey may have different concepts of the reforms.

Italy is the leader and Turkey is a member of the group known as Uniting for Consensus, which has blocked the adoption of a negotiating text to conduct the discussions on reforms and ultimately their statements in support of reforms could probably be just that.

Italy’s Prime Minister Mario Draghi said: “Our common institutions must renew themselves. We strongly support the need to reform the UN Security Council to make it more representative, efficient, transparent.”

While expressing support for reforms, his country opposes adding permanent members, mainly because of its objection to Germany getting one.

Turkey’s President Recep Tayyip Erdogan said that the UN will “have to become an international organisation where a common will of the entire human race can be put forward, especially the Security Council (which) has to be more effective, more democratic, more transparent, and more accountable”.

One of the strongest statements for expanding the Council came from Senegal’s President Macky Sill who as the Chair of the African Union voiced his continent’s demand.

“It is time to overcome the reluctance and deconstruct the narratives that persist in confining Africa to the margins of decision-making circles.

“It is time to do justice to Africa’s just and legitimate demand for Security Council reform, as reflected in the Ezulwini Consensus,” he said.

The Ezulwini Consensus, named for the place in Eswatini (formerly known as Swaziland) where it was agreed upon, demands two permanent Council seats for the continent where most of the Council-ordered peacekeeping operations are based.

Marshall Islands President David Kabua said: “The UN is in desperate need of a UN Security Council which is truly fit for purpose and which should be better shaped to the realities of today, not eight decades ago.”

Philippines President Ferdinand Marcos, Jr, said that the UN’s “continued solidarity will also benefit from a reformed and more inclusive Security Council and an empowered General Assembly that can hold the Council to account”.

President Ignazio Cassis of Switzerland said: “We have long been committed to favour a greater efficiency of the Council, greater transparency of its work and the involvement of all those concerned. We will continue with this mandate.”

Chancellor Scholz spoke of the irrelevance of the UN’s basic structure that is stuck in the past and removed from the reality of the 21st century.

“Far too often, these rules and institutions reflect the world of 30, 50 or 70 years ago, and that also goes for the UN Security Council,” he said.

“Germany has for many years been committed to its reform and expansion, first and foremost to include the countries of the global South.”

The Japanese Prime Minister said that there have been debates about the functionality of the Council for almost 30 years, “but what is truly needed now is not a discussion for the sake of discussion, but actions toward reform”.

“Even among the permanent member states of the Security Council, there are some countries that have shown a willingness to embrace reforms, but there can be no reform without negotiation.”

Emphasising the need for a negotiating text amid divergent texts, Kishida said: “The various positions cannot be compromised, or converged without any negotiation.

“The time has come for text-based negotiations to reform the Security Council… let us gather a wide range of wisdom, including from experts and build momentum.”

Looking at the global current state, President Bolsanaro said: “A reform of the UN is essential if we are to find world peace. In the specific case of the Security Council, after 25 years of debates, it is clear that we need to look for innovative solutions. Brazil delves into this topic based on an experience that goes back to the beginnings of the UN.”

US President Joe Biden is to take up the Council reforms in his speech to the Assembly on Wednesday and come up with new ideas, according to Permanent Representative Linda Thomas-Greenfield.