The Gandhis Must Vacate For An Opposition To Take Shape 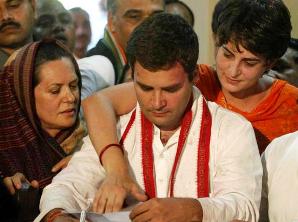 After the vigorous opening speech in the Lok Sabha by Prime Minister Narendra Modi, Sonia Gandhi’s rump of a party looked even more battered and bruised.

The most reassuring news for them since the May 16 election results is spread across three columns of Times of India: Gandhis will personally probe the poll defeat. In other words the regular system of the famous A.K. Antony committees to investigate Congress defeats is being discarded.

Antony, an acute Gandhi loyalist, never in the course of his numerous probes, turned the search lights on his political masters. But this time he may be left with no room for maneuver. The Gandhis will be on the dissection table. Reports of irreversible poor health may be leaked. What better way to stop the leak than sink the very idea of the Antony Committee.

That the mother and son team have undertaken to probe the party’s rout implies that their leadership was not flawed, that the fault for the debacle lies elsewhere. The decision also implies that atleast the Gandhis believe there still is a party under their leadership, intact.

Senior leaders have been charting their own course. As soon as Commerce Minister Anand Sharma sensed rout, he obtained from Sonia the permission to represent the Congress at President Jacob Zuma’s inauguration in South Africa. Earlier foreign minister Salman Khurshid requested the Egyptians to let him see Luxor as India’s minister for external affairs.

Shashi Tharoor, with eye always on the main chance, began to publicly wish Narendra Modi were his leader, inviting a rebuke from Mani Shankar Aiyar who went on to say on TV that “Rahul should be allowed to do the good work he is doing”.

The greatest security for the Gandhis, one which will keep them on their perch, is that there is no life left in the rump to ask questions. Those who could have asked questions, like Jyotiraditya Madhavrao Scindia, have been kept outside the paddock. The simple principle of dynasties is: the crown prince must not have a challenger. The queen must never be upstaged. Even for the job of the President of India she could only settle for the lackluster Pratibha Patil.

The truth is that the make-belief shrouding the last days of the Gandhis cannot last very much longer. Their saga is not likely to end in tragedy. Tragedies require a quality of heroism which is missing here. Their’s is shaping up to a pathetic end. Are they really waiting for another rout in the state elections?

It is very easy for Sonia Gandhi to blame the spectacular defeat on scams, the party’s inability to communicate, unmotivated cadres, debilitating bipolarity at the top, unidentifiable leadership, a formidable list. Will she ever admit to herself that she was badly advised by a concentric circle of advisers who did not have their fingers on the pulse?

It will be an act of great courage to face the unbelievably harsh truth. Never has a political family been so universally hated, despised, loathed. This was part of the energy which became a wave for Modi.

Sonia Gandhi must reflect (the young man seems incapable of any reflection) how adoration in 2004, when she refused the prime ministership, turned to such undiluted disgust by 2014.

From the very beginning, the Congress president demonstrated her inability to distinguish between loyalty and sycophancy. Remember Oscar Fernandez weeping inconsolably because “Madame” had refused the crown. And the dim Renuka Chaudhury let loose upon chat show audiences as some sort of a Congress intellectual. She too was rewarded for having wept copiously at “Mam’s” refusal of the crown.

From the very outset, Sonia Gandhi was credited with charisma she never had. P.V. Narasimha Rao had brought the party down to 140 seats in the 1996 elections. Sonia Gandhi never improved on the party’s dismal performance. In 2009, when the Congress bagged 209 seats, the credit was placed at Rahul Gandhi’s door for having generated a great youth surge. The solitary beneficiary of this faulty diagnosis was Omar Abdullah. His father’s candidature as chief minister was set aside in deference to the “youth surge”. Omar proceeded to have a ball by setting up a lavish bungalow in Lutyens Delhi and became a commuting chief minister with remote control.

The leader of the youth brigade, Rahul Gandhi, kept the Congress, opposition, captains of Industry, the media, on sixes and sevens with his hare brained schemes about a new system of selecting candidates. Even if Congress leaders saw great merit in Rahul Gandhi’s pearls of wisdom, the nation, 65 percent of which is populated by under 35 years of age, saw through the rubbish. The drubbing they have administered in these elections will keep the Gandhis against the ropes, gasping. If they do not chalk out an exit strategy for themselves and, in a dazed state, wait for the state elections, I am afraid they are waiting for a knockout punch. It would be nice if the Gandhis make way gracefully. The country needs a focused opposition.

After the Babri Masjid debacle, P.V. Narasimha Rao called a Congress session at Tirupati in 1993. The party elected a Working Committee not to Narasimha Rao’s liking – Arjun Singh, Sharad Pawar, Rajesh Pilot and so on. Willfully, he found reasons to annul the AICC results. Well, the Gandhis must hold similar elections and, unlike P.V., abide by the results. Otherwise they will be trapped like sparrows in a movie hall flapping against the giant screen in full public view.

*Saeed Naqvi is a senior commentator on political and diplomatic affairs. The views expressed are personal. He can be reached on [email protected])