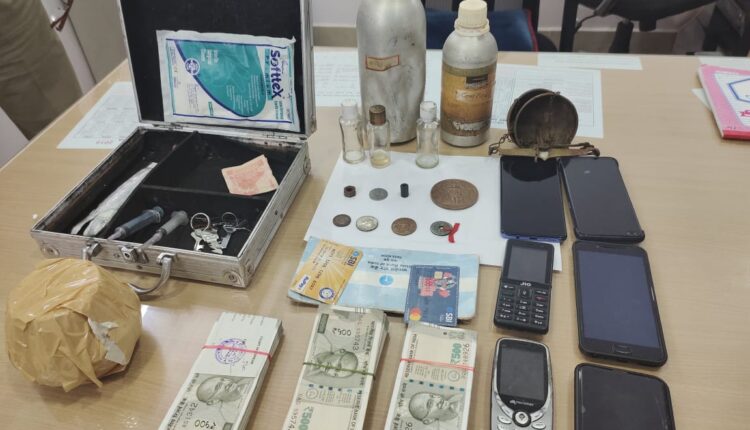 Berhampur: The police busted a gang dealing with illegal trade of ‘Hanuman Coins’ for Rs 2 crore after seven persons were held in Badabazar area of Berhampur town on Monday.

Acting on reliable information, the Badabazar police station personnel conducted a raid at the house of one Surjya Patra at Shanti Nagar. The police found the seven persons congregated at the house for a deal of Rs 2 crore for three ‘Hanuman Coins’ and were waiting for the arrival of customers.

During a search the three ‘Hanuman Coins’, Rs 1.5 lakh cash, two motorcycles, magnate, spirit and other incriminating materials were seized from the possession of seven persons. In the meantime, house owner Surjya Patra managed to flee the spot.

The seven accused Pradeep Mahapatra of Khetrajpur, Anil Kusum of Sasan, Suresh Meher of Khetrajpur, Akshaya Kumar Patra of Soroda, Jayanta Pradhan of Panposh, Vijen Kumar Bag of Panposh and S.Jayaram Patra of Bomkei in K.Nuagaon were apprehended. They were forwarded to the court today.