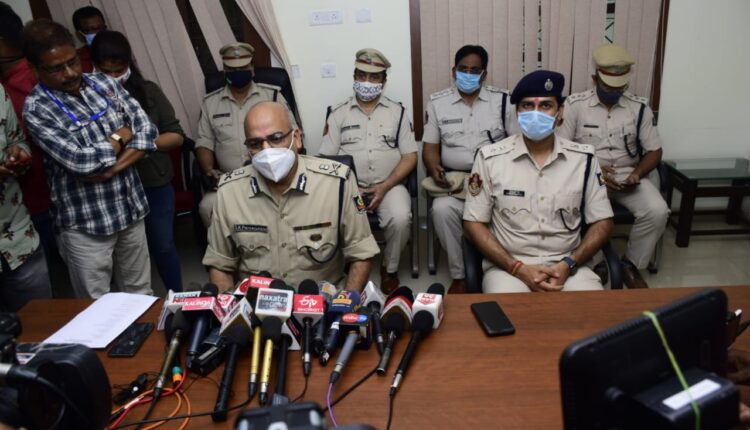 Bhubaneswar: Dreaded gangster Sheikh Haider, who was on run from the SCB Hospital in Cuttack in past six days, was nabbed from Telangana after an 120-hour-long operation launched by the Commissionerate Police.

Briefing a presser here, Priyadarshi said, “The Cuttack UPD Police successfully apprehended Haider, who had fled giving a slip to a guard on duty from the SCB between 4.00 PM and 4.30 PM on April 10, from Telangana following 120 hours of long efforts.”

Narrating about ‘Operation Haider’ started on April 13 for three days till his detention on April 15 evening, the CP said that Sheikh Haider is a dreaded criminal in Odisha. He is sentenced to life after being convicted in two cases. He was lodged at the Sambalpur Circle Jail. On March 23, Haider had visited the SCB Medical College & Hospital in Cuttack for treatment. At around 4.00 PM or 4.30 PM on April 10, he managed to escape from the hospital after intoxicating the on-duty guard of Sambalpur Police.

He said that the Commissionerate Police received the information about his escape after 3 hours at around 7.00 PM on April 10. Based on his criminal records, the Cuttack police led by DCP Prateek Singh launched the manhunt and initiated a probe from all angles to nab the dreaded gangster.

Expediting the investigation, the CP had formed police teams to search the criminal in West Bengal, Jharkhand, Maharashtra, Andhra Pradesh and Telangana. The teams were engaged to trace the physical clue and technical scoops by identifying the past contacts of Haider.

“In this connection, Yakub, one of aides to Haider, was arrested in Cuttack. We grilled many of his associates to ascertain his whereabouts. During the course of investigation, on April 11, we came to know that Haider had bigger chance to move to Andhra Pradesh or Telangana,” Priyadarshi said.

Based on inputs from technical surveillance team, two police teams led by IIC Badambadi and IIC Chauliaganj respectively had rushed to Telangana.

The CP said that Haider had fled to Telangana with help of his son and some of his associates living in Hyderabad, in a car on April 10.

“During the probe, we almost zeroed down that Haider had moved to Telangana via Andhra by road. Based on information from the technical surveillance team under supervision of Cuttack DCP, we tried to track his locations and with help of Hyderabad and Telangana police teams, we kept close vigil on his movement. Based on police inputs about his presence at a particular place in Sangareddy district, we intercepted Haider, who was riding a motorcycle. The team led by Badambadi IIC caught him on the way at around 6.00 PM on Thursday,” Priyadarshi told at the press meet.

Soon after Haider’s arrest, he was produced before a local court in Zahirabad late on Thursday night. He was brought back to Odisha on a transit remand in a flight from Telangana.

“We will produce him in the JMFC Court in Cuttack in connection with an escape case registered at the Mangalabag Police Station. It is our sole duty to reveal the fact as to how the gangster managed to flee from the hospital and persons involved in his escape,” he added.

As part of investigation into the case, the CP is currently interrogating seven suspects linked in his escape case.

Haider’s aide, who had supplied ‘spiked’…