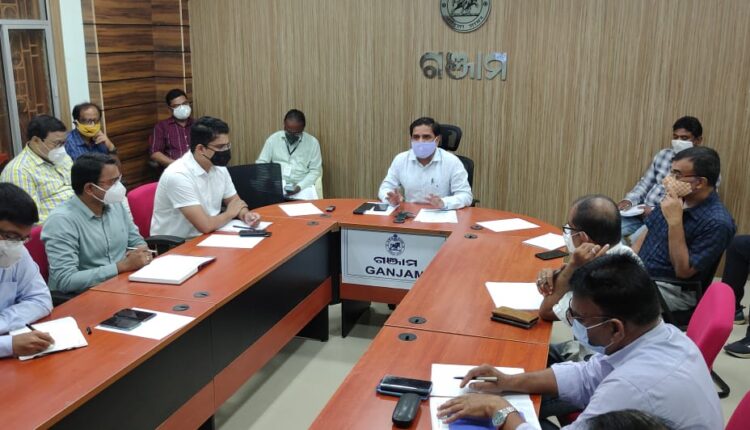 Chhatrapur: In view of the Regional Meteorological Centre’s forecast of heavy rainfall on October 19 and 20 due to a fresh low pressure over the Bay of Bengal, the Ganjam district administration today held an emergency meeting to take stock of preparedness and asked its staff not to leave headquarters till the end of this month.

During an emergency meeting through video conference, Ganjam District Collector Vijay Amruta Kulange directed the line departments and Revenue Department to be prepared to ensure zero casualty in the district. The Collector stated damages are likely to occur due to incessant rains in the district and hence, the officials must be ready to meet any eventuality.

All the water bodies in the district are swelling due to heavy rain last week. The damages due to another low pressure will be severe in the district. The Collector asked officials to remain prepared and keep enough stock of relief materials in different parts of the district.

He directed Sub Collectors to be in touch with Sarpanchs as part of the preparations and asked Swayam Siddha, Covid Monitor and Covid Sakhi volunteers to remain alert.

Also, the administration officials and volunteers were asked to download ‘zoom’ app to discuss the situation if need arises. It was decided in the meeting that movement of people and vehicles will be stopped on bridges and low lying area that are susceptible to flood.

Among others, the Berhmapur Municipal Corporation Commissioner, Project Director DRDA, Berhampur Sub Collector and senior officials were present during the meeting.

The Regional Meteorological Centre predicted heavy rainfall in Ganjam and Gajapati districts due to the low pressure on October 19 and 20.