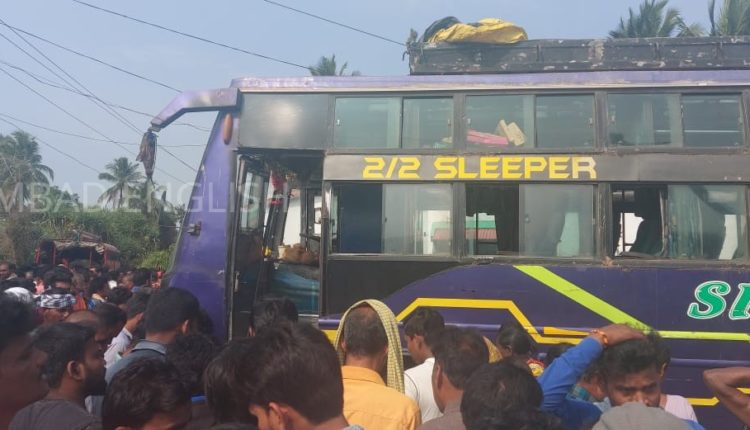 Berhampur: The Golanthara Police registered a case in connection with the Ganjam bus tragedy which claimed at least ten lives and injured several persons yesterday.

Taking suo motu cognizance of the incident, police registered a case under sections 279, 304 (A), 337 and 338 of the IPC. Berhampur ASP will investigate into the matter, said Berhampur SP Pinak Mishra, adding that the driver of the bus fled after the mishap.

Power distribution agency SOUTHCO will examine the circumstances that led to the accident and appropriate action will be taken on the basis of the report, he said.

Odisha Power Transmission Corporation Ltd (OPTCL) CMD, Saurav Garg said, the SOUTHCO has been asked to give a detailed report about the transmission line at the site, including the height of the 11 KV wires.

Notably, at least 10 persons, including six women, were electrocuted while 22 sustained injuries when a bus in which they were travelling came in contact with a power transmission line in Golanthara area of Ganjam district, yesterday. The victims were heading from Jangalpadu towards Chikarada village in the ill-fated vehicle for attending an engagement ceremony.

“Preliminary information suggests that the luggage carrier of the bus came in contact with the transmission line along the road when the driver tried to give way to a two-wheeler on the narrow road,” said Chief Fire Officer (CFO) Sukant Sethi.