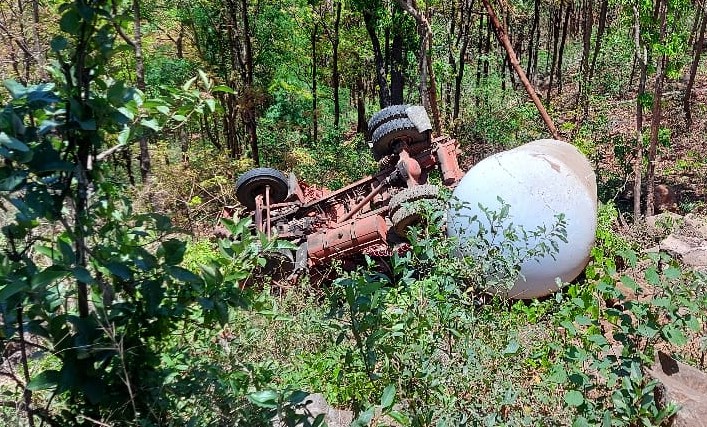 Koraput: A gas tanker skidded off the road and turned turtle on NH-26 at Jeypore ghat in Odisha’s Koraput district, today.

The driver of the vehicle was crushed to death under the damaged truck. On being informed about the mishap, Fire Services personnel rushed to the spot and recovered the body.

The district administration sealed the NH-26 at Kolab Chhak and Bariniput due to leakage of gas from the tanker.

The ill-fated vehicle was reportedly heading towards Raipur from Visakhapatnam carrying the fuel of Hindustan Petroleum (HP).

“An expert team of the company and an ODRAF team will empty out the gas from the damaged tanker, after which vehicular movement will be allowed on the portion of the road,” said Koraput Collector.

The Koraput-Jeypore road has been closed. Vehicles to and from Koraput-Borigumma may take the Ranigada Ghat road till further notice, the official said.

Koraput-Jeypore Road is closed due to a road accident. Traffic to and fro Koraput-Borigumma may take the Ranigada Ghat road till further notice.

Cyclone Yaas: Wind warning issued for Odisha; Rain from May 25