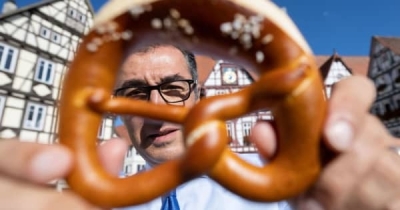 Berlin: The German government is eyeing a Unesco heritage status for the pretzel, a traditional type of baked bread that is commonly shaped into a knot.

Agriculture Minister Cem Ozdemir is getting behind an application by the baker’s guild of Baden-Wurttemberg for pretzel-baking to be recognised by Unesco for intangible cultural heritage status, dpa news agency reported.

The pretzel has been in use as an emblem of bakers and formerly their guilds in southern German areas since at least the 12th century.

The first point of discussion on the route to the heritage status is the question of what constitutes a real pretzel.

While the Wurttembergish variant has a higher fat content and thinner, crispier arms, the Bavarian pretzel is also not cut open at the bottom, allowing it to tear open during the baking process in a more rustic fashion.

Ozdemir, who was back in his home town of Bad Urach at the foot of the Swabian Alps in Baden Wurttemberg on Thursday, said that “the Bavarians think their pretzel is the best, and we know that ours is the best”.

However, he called for a “cross-country initiative”, that would grant heritage status to the pretzel variations not just within Germany, but also in Austria, Switzerland, and France.

All pretzel enthusiasts will be happy to see their craft honoured as cultural heritage even as, Kaniber said, adding “it will remain a matter of taste which pretztel is really the best”.

German bread-baking and beer-brewing have already been listed in the Unesco inventory of intangible cultural heritage.

Transportation of cows not an offence: Allahabad HC