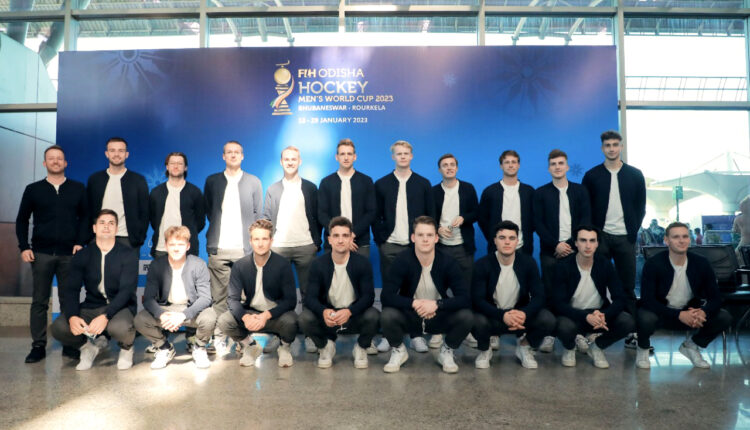 Bhubaneswar: Germany Men’s Hockey Team, who has twice won the Hockey World Cup title, arrived to a rousing welcome at the Biju Patnaik International Airport (BPIA) in Bhubaneswar on Saturday ahead of their first match in FIH Odisha Hockey Men’s World Cup 2023 Bhubaneswar-Rourkela.

Germany is in Pool B, along with Japan, Belgium and Korea. The team will open its campaign against the Japanese side on January 14 in Bhubaneswar.

They have won the Men’s Hockey World Cup twice in 2002 and 2006, respectively, and will be looking to add to their trophy cabinet.

“After the Olympics, we got a new coach and it was a long preparation of more than eight months. We won 13 out of 18 matches in the last year and will look to replicate the same performance in the World Cup,” commented Captain Mats Grambusch.

The Germany Men’s Hockey team finished fifth during the previous edition of the tournament in 2018 and the team Captain is confident that they will be able to improve their performance in the FIH Odisha Hockey Men’s World Cup 2023 Bhubaneswar-Rourkela.

He stated, “When you look at this kind of surroundings, it’s already a little bit of excitement and we are looking forward to playing in Odisha. Our preparations have been going really well as we recently played a six-nation tournament in Spain. We had a lot of things to develop and are ready to play.”

Germany has Andre Henning as their Head Coach, who talked about the mental state of the German players ahead of the big tournament. He said, “Our players did a lot of things while preparing for the tournament and are confident in their abilities. We worked on our defence and got better at it as a group. The players have gotten better tactically as well.”

The team has been in fine form in the last year and the Head Coach has full faith in his players who are selected to play in the FIH Odisha Hockey Men’s World Cup 2023 Bhubaneswar-Rourkela.

Henning said, “We had a strong year as we won 13 FIH Pro League matches and were between 5th and 6th in the World Rankings. Hence, we are looking forward to playing in the tournament and if we reach the semis that would be a big success. However, our ultimate aim is to win the World Cup trophy.”