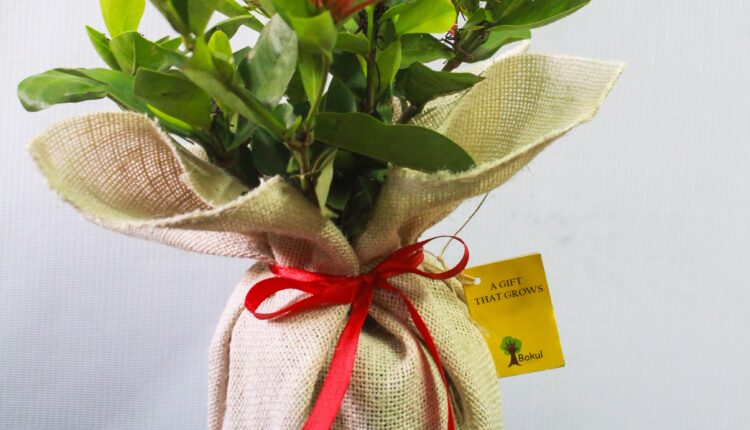 Bhubaneswar: With Odisha government imposing a ban on the sale and bursting of fire crackers during this Diwali apprehending increase in Covid-19 cases due to air pollution, BAKUL Foundation has renewed its 11 year old campaign to gift plants with greater urgency.

“We give gifts to show that we care for the other person, and there cannot be a better way to show we care during this pandemic than by gifting a plant”, said Sujit Mahapatra, Founder of Bakul Foundation.

In 2019, Bakul Foundation had a very good response, much better than previous years and 550 gift plants had been sold. This year, we hope that people will gift plants in greater number though gifting may have reduced because it adds so much meaning during this pandemic. Even indoor plants for the desk or plants inside the house and in the balcony are so significant to have even if one does not have space for a garden. The more the greenery around oneself, inside the room, or in easy access to, the healthier one remains, Mahapatra added.

With its creative team of volunteers, Bakul has come up with attractive packaging for the plants in cane baskets and jute bags, and one could choose from flowering plants like the Ixora or Toronia, medicinal plants such as Rama Tulasi, Insulin and Ayappan or tree growing plants such as the Bakul, the Jackfruit and Jamun. There are indoor plants such as Spider plant and Syngonium as well.

There is a complimentary gift hamper with hand painted diyas and handmade chocolates in a basket that comes with each plant for this Diwali, and the entire package is priced at Rs 300.

Trees and natural greenery have an important role as they sequester carbon and other pollutants and release oxygen. It is scientifically claimed that an average tree sequesters about 1 tonne of carbon in its lifetime. But in winter, they become less effective as they shed leaves. There have been significant researches establishing the role of trees in reducing respiratory diseases. The first major nation-wide study in the US by the US Forest Service scientists calculated that trees save 850 human lives a year and prevent 670,000 incidences of acute respiratory symptoms. In New York City alone, trees were supposed to save about 10 lives a year. The study proved conclusively that trees make the city healthier let alone address climate change and give us shade.

Bakul Foundation has been running a campaign for the last 10 years to promote the culture of gifting plants on various occasions such as birth and birthdays, weddings and anniversaries, funerals and events.