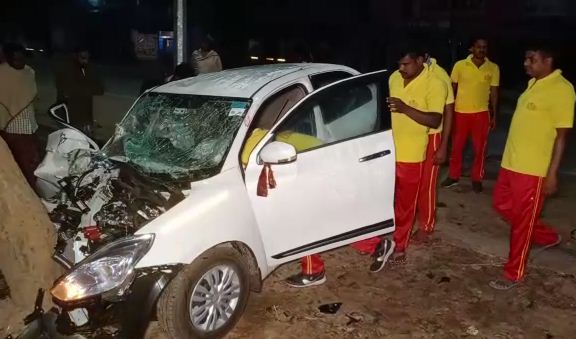 Cuttack: In a tragic incident, a minor girl was killed and four others sustained injuries as a car in which they were travelling and a truck collided head-on near Katikata Chhak under Nischintakoili police limits in Odisha’s Cuttack district, this morning.

The deceased has been identified as Sarita Malik(17). The victims, identified as Debashish Mohanty, Bababi Malik, Biswajit Malik, and Sandhyarani Malik, have been hospitalised.

According to reports, they were bringing an ailing person to a private hospital in Bhubaneswar from Binjharpur in Jajpur district in the car. A collision took place between the ill-fated vehicle and a tipper truck. After being hit by the truck, the car dashed against a roadside tree killing the girl on the spot.

On being informed, police reached the place, rescued the injured ones, and admitted them to the SCB Medical College and Hospital in Cuttack for treatment.

The driver and helper of the truck fled the spot after the mishap. Police have seized the vehicle and started an investigation into the incident.