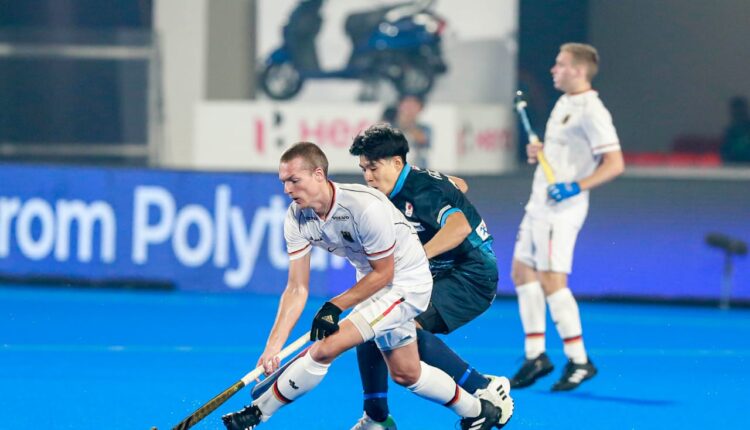 Bhubaneswar/Rourkela: The Day 2 of the FIH Odisha Hockey Men’s World Cup 2023 continued to thrill packed crowds in Bhubaneswar and Rourkela as New Zealand, Netherlands, Belgium and Germany earned comfortable victories, as Pools B and C got underway.

New Zealand took on Chile in the first contest of the day in Rourkela. Early nerves from the Chilean defence allowed the Kiwis to grab the initiative and get 3 first half goals, but Chile were resurgent in the second half and grabbed their first ever goal in the FIH Men’s World Cup with a beautiful counter-attacking move to earn a well-deserved consolation goal.

It was the turn of the European giants next as each one of Netherlands, Belgium and Germany faced stiff opposition from Malaysia, Korea and Japan respectively, but stepped up their game in the second halves to register comfortable wins by big margins by full times.

Netherlands secured a 4-0 win against Malaysia in the second game in Rourkela. It was then Pool B action in Bhubaneswar where Belgium scored 5 second half goals to win 5-0 against Korea, before Germany repeated the same pattern, scoring 3 goals in the second half against Japan to run away 3-0 winners. 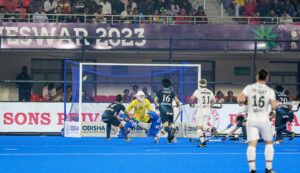 New Zealand was quick out of the gates applying heavy pressure inside the Chile half. Chile relied on counter attacks, looking for runners on the wings to find space behind the Kiwi backline.

Playing in their first ever World Cup game, the Chilean backline played tentatively and paid the price in the first half as Sam Lane and Sam Hiha (twice) capitalised on individual errors to put New Zealand up 3-0 inside 20 minutes.

Chile were much more composed in defence in the second half and that allowed them to launch long aerial balls behind the New Zealand defence. One such ball found Ignacio Contardo who weaved into the circle, beating 3 Kiwi defenders, before taking the ball past the keeper and finishing on the reverse to give Chile their first ever goal in the Men’s World Cup!

The goal proved to be a consolation but it was a good reward for Chile who shook their early nervousness and gave a great account of themselves in the second half. Chile keeper Leon Hayward, who was subbed in at half-time was particularly terrific for them, pulling multiple saves to keep New Zealand out in the entire second half.

Sam Ward who opened the scoring was awarded player of the match and said, “Chile are a tough team to play against. We knew it would be a good game, so it is good to get the first win. We are looking forward to the next game here.”

The start to the game looked like it could be a long day for Netherlands as the Malaysian defence frustrated the Dutch attackers, comfortably keeping them out of dangerous positions.

However, an error in the 20th minute by the defence gave Netherlands a half chance and they showed why they are so dangerous as This van Dam pounced on the loose ball and put it away to open the scoring for Netherlands.

The Dutch added a second goal before the half as Jip Janssen who had seen a penalty corner saved earlier in the half, put a penalty stroke away in the 24th minute to double his team’s lead.

Netherlands added two more goals through Teun Beins and Jorrit Croon, in the fourth quarter after Malaysia had spent a good part of the third quarter on the attack trying to score a goal that would let them back into the game.

The final score line reflected a comfortable 4-0 win for Netherlands, but Malaysia had their moments in the game for large portions, primarily in the 1st and 3rd quarters.

Jorrit Croon, scorer of the beautiful 4th Dutch goal was awarded player of the match and said: “It is a great feeling playing in this stadium in front of this packed crowd. It’s a good win to start the tournament but we can’t get carried away, it’s just one game and it’s a long tournament.”

Belgium vs Korea promised to be a thriller with the Olympic and World Champions going head-to-head against Korea who were in brilliant form during the FIH Hockey Men’s Nations Cup that took place in December 2022. Korea gave a great account of themselves in the first half, going toe to toe with Belgium in attack while also keeping the Belgian attack at bay to go into the half at 0-0.

Belgium scored in the first minute of the second half with Alexander Hendrickx burying his third penalty corner attempt of the day. The first goal opened the floodgates for Belgium and they tacked on 4 more goals in the final 16 minutes of the game to earn a comfortable win.

Germany vs Japan followed a similar pattern to the game that preceded it as the first half saw Japan frustrate the 2-time champions and match them step for step, but a drop in intensity in the second half gave the German’s a foot in the door and they made full use of the opportunity to grab the goals and take all 3 points.

Gonzalo Peillat was stopped twice in the first half from the penalty corners, so Germany tried an intricate variation in the second half and it unlocked the Japanese defence with captain Mats Grambusch getting the final touch.

Germany scored a second on a brilliant counter as a pass by Müller from his own half found Rühr behind the Japanese defence, and he rounded the keeper and put the ball in the back of the goal brilliantly. Some more good work by Ruhr then allowed Prinz to get on the scoresheet to make it 3-0 to Germany in the 49th minute and seal the win.

Christopher Rühr who scored the second goal and set up the third for Germany was awarded player of the match and said, “My goal was all thanks to quite an intuitive pass by Muller and I just had the keeper to beat, so that was the easy part. It’s great to play in front of 15,000 loud cheering fans in India and I couldn’t feel any better after this win.”