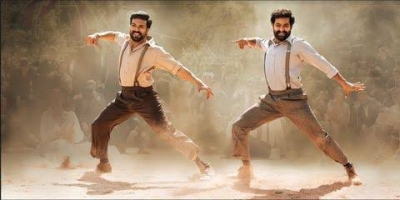 Los Angeles: India is all set to bring in the Golden Globe 2023 home as the song ‘Naatu Naatu’ from S.S. Rajamouli’s magnum opus ‘RRR’ won the Best Original Song, Motion Picture at the 80th Golden Globes.

‘Naatu Naatu’ was in competition with ‘Carolina’ from “Where the Crawdads Sing”, “Ciao Papa” from “Guillermo del Toro’s “Pinocchio”, “Hold My Hand” from “Top Gun: Maverick,” “Lift Me Up” from “Black Panther: Wakanda Forever”.

To receive the honour was music composer M. M. Keeravani, who was accompanied with his wife Srivalli.

He dedicated the award to Rajamouli and the actors Ram Charan and NTR Jr.

While accepting the award, he said: “Thank you very much for this prestigious award: “This award belongs to SS Rajamouli for his vision, I thank him for constantly believe and supporting my work. N.T. Rama Rao and Ram Charan who danced with full stamina.”

It centres around two real-life Indian revolutionaries, Alluri Sitarama Raju and Komaram Bheem, their fictional friendship and their fight against the British Raj.

Set in the 1920s, the plot explores the undocumented period in their lives when both the revolutionaries chose to go into obscurity before they began the fight for their country.