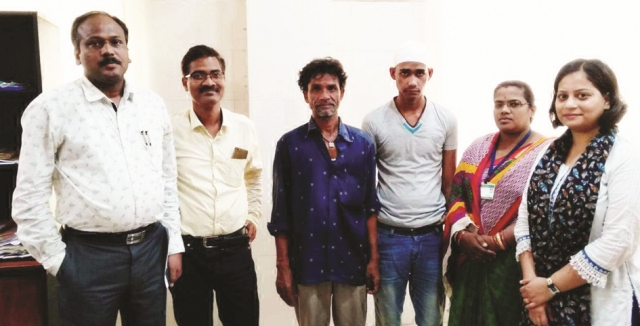 Cuttack: The SCB Medical College and Hospital in Cuttack turned a place for reuniting two mentally ill youths with their parents after years.

It was a tale of two families, who were in the pain after their mentally ill sons went missing from homes for a long period of time. Finally, the parents got their missing sons at the Mental Health Institute of Odisha’s premier medical institution where they were undergoing treatment.

According to reports, Babula Das of Nilgiri area in Balasore district and 22-year-old Paban Kumar of neighbouring Chhattisgarh State were missing from their homes 20 years and six months ago respectively. The families of both the youths were unaware of their whereabouts. Even, they had lost hope of their sons’ aliveness.

Babula returned to his home on Saturday after 20 years. His family was overwhelmed when they came to know about him that he is alive and undergoing treatment at the SCB.

Reports said that Babula had gone away somewhere from home in 1998 after he lost his mental balance. Despite rigorous search, his family failed to find him.

Thanks to a member of the Balasore-based NGO, who admitted Babula to the SCB after rescuing him three years back. His family members rushed to the hospital to bring him back to home after they got information about Babula.

Similarly, Paban Kumar, who was suffering from mental illness, suddenly disappeared from home six months ago. His family thought that he is no more. However, his father reached the SCB hospital yesterday to take him to home after knowing about his aliveness few days back.

Both the patients made their way back to homes with cooperation from Mental Health Institute Director Prof Dr Sarada Prasanna Swain and other doctors yesterday.

Mostly the patients are coming to the hospital after being rescued from different locations and several families are dropping the patients here for without following any admission procedure, said Dr Swain.

As the patients are not being rehabilitated properly, the number of mentally challenged patients is increasing day by day at the ward. It’s high time the district administration as well as NGOs should be concerned about rehabilitation of such patients, he added.