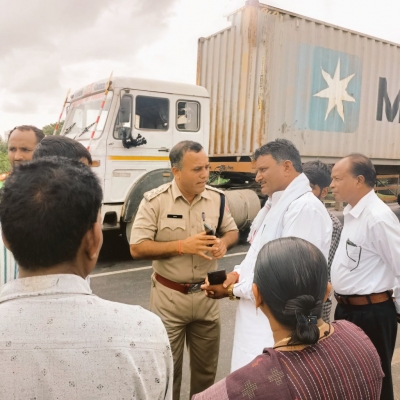 Ahmedabad: Congress sitting MLA and the party candidate from Danta constituency of Gujarat’s Banaskantha district Kanti Kharadi has allegedly gone missing after an attack on him on late Sunday evening – a night before polling.

Gujarat Congress working president Jignesh Mevani was first to share the information about the missing party candidate on social media. “BJP candidate and party goons have attacked Congress candidate Kantibhai Kharadi, when he was returning after visiting villages and workers, his car was intercepted and attacked, it was an attempt to kill him, the vehicle has turtled and Kantibhai is still missing,” Mevani said in a tweet.

Banaskatha district police control room in-charge has confirmed that the control room has received an information about an attack on Kanti Kharadi. The incident has happened in the Hadad Police station area. When contacted, the investigation officer V.R. Makwana was not reachable.

The district Congress president Bharatsinh Vaghela told IANS that his efforts to reach Kharadi has failed. “Though I tried to speak and seek intervention of the Superintendent of Police, he is not responding to my calls.”

Danta seat is reserved for Scheduled Tribe communities. BJP has fielded Latubhai Parghi against him.

The seat is set to go for polls Monday along with 92 other constituencies of the state in the second and final phase of the assembly elections in the state.