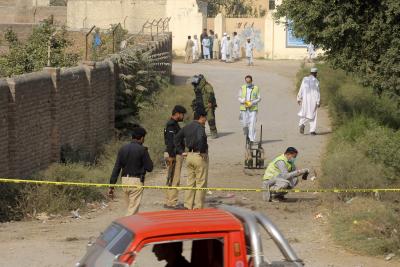 According to District Police Officer (DPO) Waqar Khan, the gunmen managed to escape after the attack.

“Both the constables died on the spot,” he added.

On Monday, Pakistan launched a 10-day polio vaccination drive in Khyber Paktunkhwa, deploying a large number of policemen to ensure the safety and security of the polio health workers.

Khan said that he has deployed a large contingent of police in the area, who are conducting a door-to-door search operation.

“We are after the attackers and sooner or later we will catch them. Security of the vaccinators has been further beefed up and at least 273 teams have been deployed in the district as part of the drive,” he added.

Pakistan had a polio-free run for almost a year but 14 new cases, all from the violence-stricken province, have been reported in the past few months.

Pakistan is one of the few countries in the world where new polio cases still surface, though the number of affected children has declined massively compared to 306 in 2014.

The law and order situation in Khyber Pakhtunkhwa deteriorated quickly after the fall of Kabul to the Taliban last year.

The Afghan Taliban released all Pakistani prisoners, who, many say, have crossed the border to carry out terror activities in the country.

Tank district has been among the most sensitive as police, security forces, security check posts and polio health workers have been targeted and killed in the past as well.

As per reports, since the Taliban takeover in Afghanistan, the Tehreek-e-Taliban Pakistan terror group has become more active as they have carried out many targeted attacks on security personnel.

Police and security forces are the main target of terror attacks and vicious assaults.

The general public has also been bearing the brunt as traders are constantly receiving extortion calls from militants, who are using Afghan SIM cards.