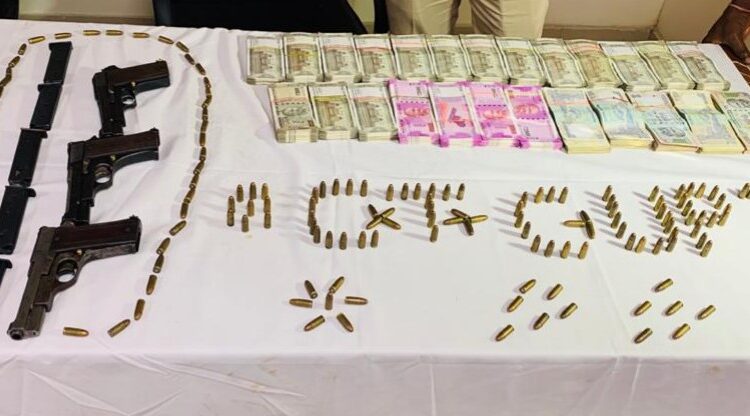 Cuttack:  Continuing its raid on the house of gangster brothers Sushant and Sushil Dhalasamanta here for the second day today, the Commissionerate police  has so far seized Rs 16 lakh cash and several arms and ammunition.

Briefing mediapersons, Cuttack DCP Prateek Singh said besides, 16 lakh cash, three guns, five magazines and 175 live bullets have been recovered from their house. The gangster brothers had hidden the guns  in the ceiling of their bedrooms.

“The D-brothers supply the guns to criminals belonging to different districts. And, despite being lodge in jail, they were collecting extortion money from people through their associates,” said the DCP.

The police personnel are using metal detectors during raid in their house. The cops are interrogating younger brother Sushil since yesterday. The cops had recovered cash, guns and live bullets from a secret chamber in the house. A fresh case has been lodged against the two brothers in connection with seizure of huge cache of arm and ammunition, said the senor cop.

Earlier this month, as many as 16 guns, 24 magazines and 1095 live bullets were seized from a secret chamber of the house. It was ascertained that the arms and ammunition were procured from Munger in Bihar.

Following the seizure, the CP launched an investigation and took both of them on a three-day remand starting yesterday  after getting permission for the same from JMFC Court .