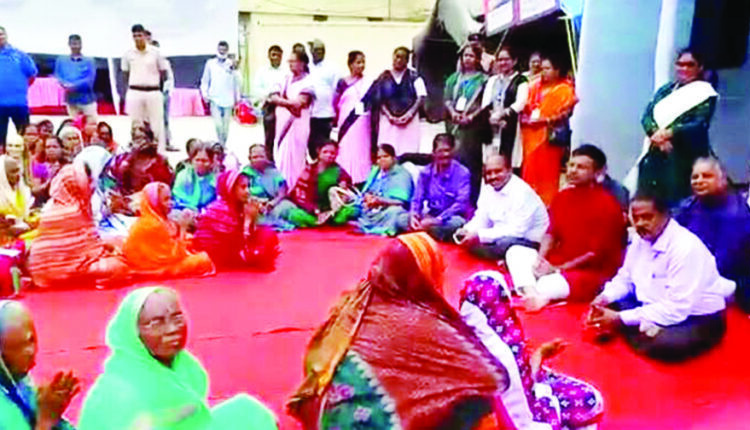 Puri: A political row has ensued over recitation of a bhajan praising Chief Minister Naveen Patnaik at a Habisiyali shelter house in the holy city here recently.

Opposition Bharatiya Janata Party (BJP) today threatened to launch an agitation if the state government does not tender an apology over the issue. The ruling Biju Janata Dal (BJD), on the other hand, alleged that the BJP leaders are doing politics over a trivial issue.

As per the allegation, some government officials encouraged the Habisiyalis (elderly women observing fast during holy Kartika month), who have been accommodated in a shelter house set up by the state government at Bagala Dharmashala here, to recite a song praising the Chief Minister Naveen Patnaik, yesterday. Puri Collector Samarth Verma and other senior officials of the district administration were reportedly present during the recital, a video of which has gone viral on social media platforms.

It is worth mentioning here that thousands of Habisiyalis from across the state throng the pilgrim city in the Hindu month of Kartika to perform certain rituals. The state government had launched a scheme a few years ago to provide free accommodation and food to the Habisiyalis, who partake abadha (Mahaprasad) once in a day during the month-long brata (penance).

BJP Odisha unit vice-president Pravati Parida condemned the incident and sought an apology from the state government. “The Habisiyalis usually offer prayers to Lord Krishna during Kartika Brata. The government officials were instrumental in forcing them to recite a bhajan praising the Chief Minister. How could somebody compare a human being with deities like Lord Krishna? This episode has shown the arrogance of the BJD government. We would be forced to launch an agitation if the state government did not tender an apology over the matter,” she said.

“The Habisiyalis usually recite prayers near the holy basil plant twice a day as part of the month-long Kartika Brata. It is unfortunate that some government officials forced the elderly women to recite a bhajan praising the Chief Minister. No one has the right to play with the religious sentiment of people,” said a social activist.

Criticising the ruling dispensation over the snowballing controversy, BJP Odisha unit general secretary Lekhashree Samantasinghar alleged that the incident has hurt the religious sentiments of crores of Odias. “The BJD has been ruling Odisha for last 22 years. This long tenure has made the party too arrogant. No one should compare a human being with Lord Krishna or Lord Jagannath,” she added.

Reacting to this, BJD leader and government chief whip in the Assembly Prasanta Muduli downplayed the incident. “The state government has done many things for the welfare of Habisiyalis. Chief Minister Naveen Patnaik has occupied a special place in the hearts of 4 crore Odias for serving them for last 22 years. If somebody has praised the Chief Minister for his good work then what’s wrong in it. The Opposition party should not do politics on the issue,” Muduli stressed.