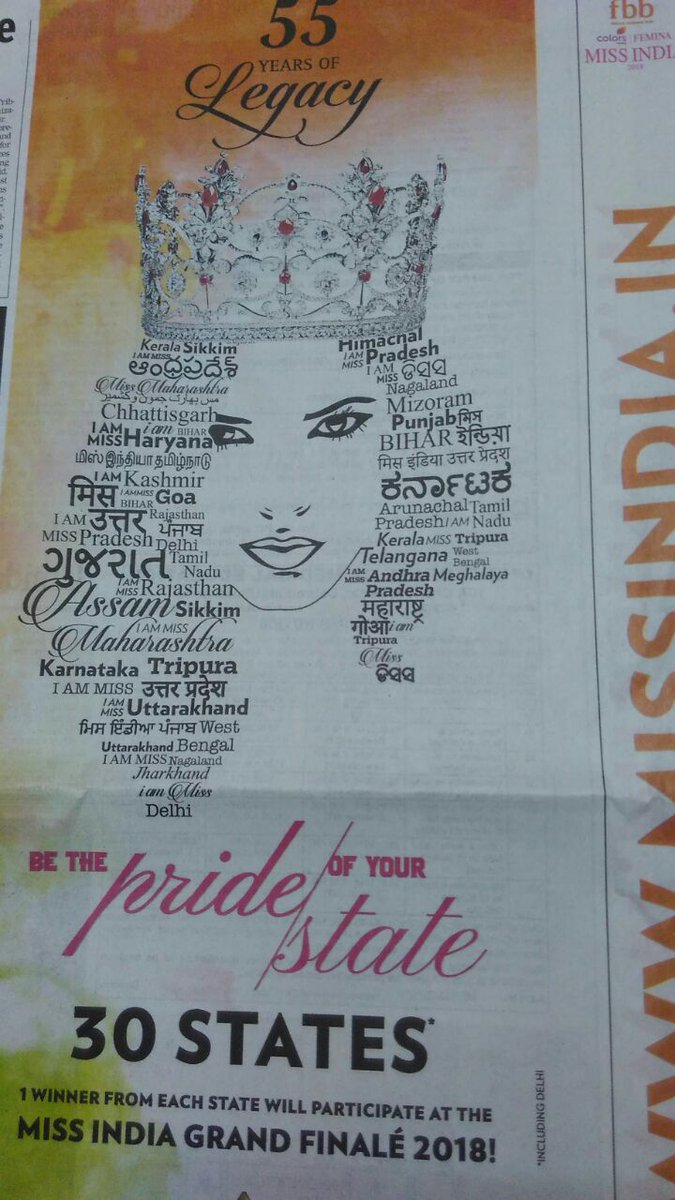 Bhubaneswar: Odisha takes pride in being one of the few states whose language has been accorded the classical status. The culturally-rich state has earned the distinction with its relentless efforts and do not tolerate any attempt to present it in a distorted way.

A recent print advertisement pertaining to a national-level beauty contest has spelt Odia erroneously, which hasn’t gone down well with its constituents.

The advertisement on a leading national daily that is calling out for participants in the prestigious Femina Miss India Beauty pageant has the names of all the states of India, barring Odisha. The ad features the India states from Tripura to Goa and Kashmir to Kerela, but a thorough search for the name “Odisha” ends in total disappointment. The name of the state is nowhere to be found, not even in tiniest of fonts in the otherwise well-designed ad.

Moreover, the creative content is peppered with regional scripts from various states of India with words such as Miss India Uttar Pradesh (written in Hindi) or the name of the state Gujarat written in the Gujarati font. However, the Odia script reads a word which is nothing short of incomprehensible balderdash.

In fact, a scrutiny of the Odia dictionary also renders the search for this word futile. A lot of brain racking does not cough up any word in the Odia language similar to this, let alone be symbolic of Odisha or Odias in any way.

What is surprising is, aren’t these ads cross-checked with content experts to correct errors, especially when it comes to the cultural identity of states? And this advertisement covers a good length of a page in the local edition of the daily.

Odias on social media who noticed this peculiarity have criticised Femina India for not doing proper ground work before publishing such content. It remains to be seen if this aberration gets corrected in way of corrigendum or is blissfully ignored.