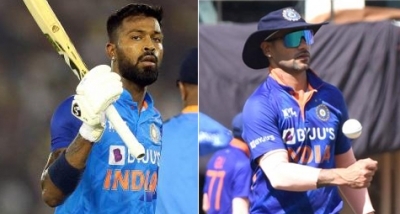 Mumbai: All-rounder Hardik Pandya will captain India in the upcoming bilateral T20I series in New Zealand while Shikhar Dhawan will lead the ODI squad, with regular skipper Rohit Sharma being rested for the tour, which begins five days after the T20 World Cup final in Australia.

Apart from Rohit, Virat Kohli and KL Rahul have also been rested from the entire tour of New Zealand. Rishabh Pant, who has already led India before, has been appointed as the vice-captain for both legs of the tour.

The likes of Shubman Gill, Ishan Kishan, Deepak Hooda and Sanju Samson will have a chance to impress once again in the absence of the senior Indian players.

Meanwhile, pacer Jasprit Bumrah, who was ruled out of the T20 World Cup with a back injury, continues to miss out. On the other hand, speedster Umran Malik has been included in both the squads.

Dinesh Karthik also misses out from the T20I squad and when queried about it, chairman of selectors Chetan Sharma during a virtual press conference, pointed towards workload management as the reason for his exclusion. Mohammed Shami, R Ashwin and Axar Patel are the other players in the T20 World Cup squad, who aren’t part of the squad for the T20Is against New Zealand.

India will play three T20Is and three ODIs in New Zealand from November 18. The T20Is will be played in Wellington (November 18), Mount Maunganui (November 20) and Napier (November 22), while the ODIs are in Auckland (November 25), Hamilton (November 27) and Christchurch (November 30).