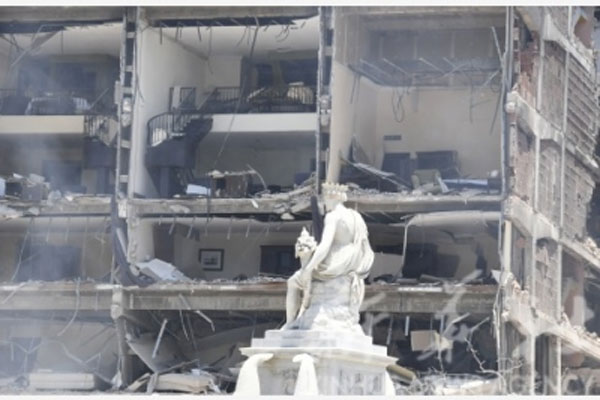 Havana: A powerful explosion at a luxury hotel in central Havana has killed at least 22 people, with 64 people injured, the Cuban Presidential Office said in an update on Saturday.

President Miguel Diaz-Canel, who visited the site of the blast and a local hospital, said: “The explosion was not a bomb nor an attack, but a regrettable accident,” reports Xinhua news agency

A gas leak is thought to be the cause of the massive explosion at Hotel Saratoga, according to the Presidential Office.

Located opposite the island’s National Capitol building, the five-star hotel was preparing to reopen on May 10 as part of reviving the island nation’s tourism industry which was badly hit in the wake of of the Covid-19 pandemic.

At present, rescue operations are still underway as traffic has been diverted from the surroundings of the hotel.

Havana Governor Reinaldo Garcia stressed the importance of solidarity of the population after the tragic event.

The blast also caused damage to buildings near the hotel, he said, adding that “thousands of people continue volunteering to donate blood”.

An investigation into the explosion is underway, local media reported.