Have first glimpse of newborn tiger cub at Odisha’s Nandankanan 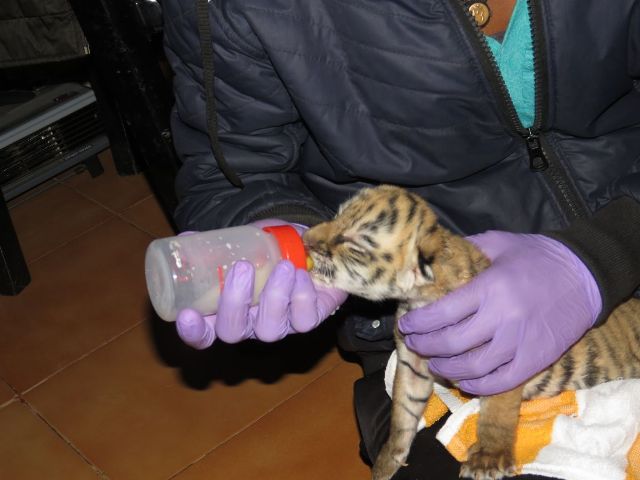 Bhubaneswar: The authorities of Nandankanan Zoological Park have shared a photograph of newborn tiger cub for the first time with media.

The tiger cub born to tigress Ankita at the zoo on outskirts of the city on January 13 was found having liquid food through a bottle every two hours.

For the first time, the photos were clicked while the baby tigress was fed 35-ml Royal Canin liquid food after she opened her eyes on January 24 following 12 days of her birth.

The cub was looking so adorable while having food through a bottle that the officials could not stop themselves from clicking the pictures of the baby.

The newborn tiger cub is the only baby of tigress Ankita surviving without her sibling.

Notably, tigress Ankita had delivered two cubs at the enclosure on January 13 in Nandankanan zoo. However, one of the cubs, a male in gender, died after few hours of her birth when the ferocious Ankita without her knowledge put her legs on her baby while she was attacking monkey, who was jumping over the enclosure. The mother lost her baby forever following the incident.

Since then, the zoo authorities have been taking care of this newborn tiger cub separating her from her mother tigress Ankita in view of her safety.