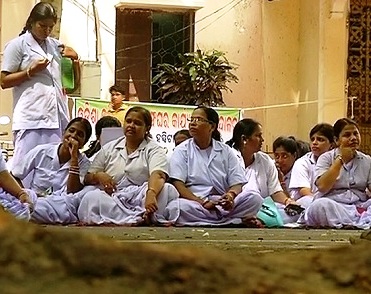 Around 2000 staff nurses congregated at MG Marg in Odisha capital alleging the State government doesn’t pay any heed to their demands despite several pleas.

As most of the nurses are deployed in Intensive Care Units (ICU) and Sick and Newborn Care Units (SNCU) of the hospitals the strike resulted in massive inconvenience for patient care.

The agitating nurses, however, in no mood to call off the strike unless the State government fulfils their three-point charter demands.

Meanwhile, lending their support to the agitation, the All Odisha Nursing Employees Association said they are going to join it from Wednesday if the government will not fulfil their demands.

“The government should regularize the jobs of the striking nursing staff who had worked for more than 10 years with meagre salary. We will continue our agitation against the government apathy if they don’t fulfil our demands immediately,” said association General Secretary Pravati Mohanty.

“We are demanding for permanent employment for those who have worked for more than six years, hike in basic pay to Rs 9,300 and provision for a grade pay of Rs 4,600,” she added.

At present, NHM staff nurses get monthly remuneration of Rs 10,700 while regular government staff nurses get between Rs 30,000 to Rs 50,000 including dearness, house rent and uniform allowances depending on their seniority.

Patient care has got severely affected as the agitating nursing staff were engaged in all emergency and critical care services like ICUs, SNCUs, casualty wards and operation theatres of government hospitals.

“We are managing our works with the help of Auxiliary Nurse Midwife (ANM) staff but it wouldn’t be possible for a long period of time. We have already informed them (agitating nurses) to join their work, or else, action will be taken against them,” said Balasore Chief District Medical Officer Bibekananda Das.

No camera phones inside Odisha’s Sri Mandir from Jan 1