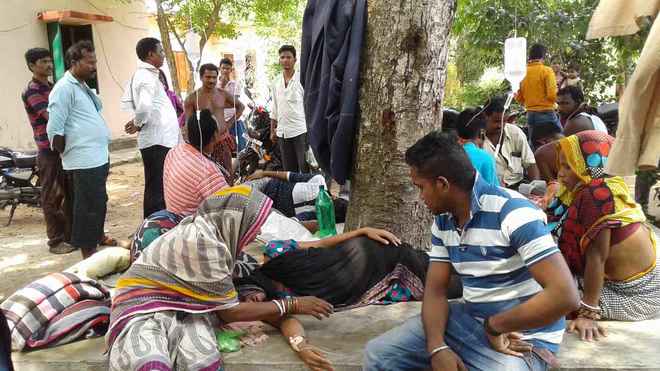 The healthcare services in Odisha continue to degrade with the way of treatment the patients undergo in the state-run hospitals. Another incident reported from Mahakalapada in Kendrapara district where the patients are getting medical services under a tree.

There was no bed, fan, toilet and patients were found lying on the ground, the saline bottles hung on the tree branches. Only one Ayush doctor was found attending the patients under the tree. The incident was reported at a primary health centre at Babar in Gogua Panchayat under Mahakalapada block in the coastal district Kendrapara.

Earlier, there were several instances of poor healthcare services and medical negligence have come to fore. The recent sight of healthcare service available in the Kendrapara district can be taken as the solid example to describe how the government primary hospitals are functioning in the state.

According to reports, among the patients registered at the primary health centre yesterday, six were given saline under the tree. Out of them four patients identified as Kamala Barik (40) of Lanjuda village, Kanchan Rout (21) of Itakhandia village, Rushia Barik (45) Ramachandrapur village and Sasmita Samal (19) of Sanarahama were suffering from dysentery. Another two patients — Kanchan Panda (80) and Sebati Samal (15) — were administered the saline for typhoid and sickness respectively.

As there was no fan and bed inside the hospital, the patients were brought to the tree for treatment. The incident drew sharp reaction among the locals.

Over 30,000 people of eight gram panchayats depend on the hospital, which was established in 1990. On an average over 50 patients used to come to the hospital every day. However, lack of infrastructure and medical staff and doctors’ shortage have become the challenge to provide better healthcare to the villagers in the block.

As per the rule, the hospital should have a MBBS doctor, an Ayush doctor and one Pharmacist. However, the MBBS doctor post is lying vacant in the past three months after the doctor was shifted to Kanika Community Health Centre on deputation. As the Ayush docor is not entitled to prescribe allopathic medicines, the patients face difficulties without getting proper treatment.

The patients have been undergoing treatment under the tree since two months, the locals alleged.