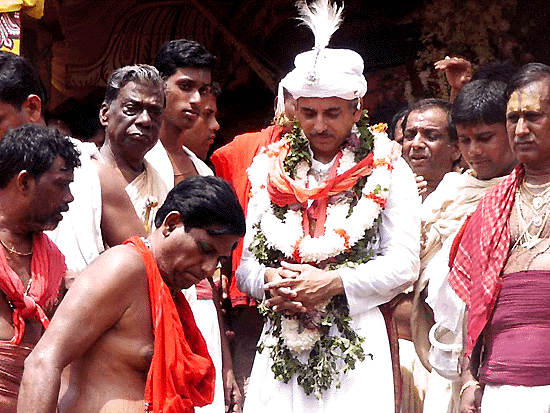 Bhubaneswar: Chief servitor of Lord Jagannath, Gajapati Maharaj Dibyasingh Deb is a reserved and private person. He comes to limelight mostly during the grand festival of Ratha Jatra.

Odisha Sun Times brings to you some lesser known facts about the king of Puri:

3. His father Gajapati Birakishor Deb died in the middle of the car festival in the year 1970 and Dibyasingh Deb had to ascend the throne on that fateful day itself.

4. The king of Puri is not allowed to participate in any cremation ceremony. A brahmin boy is adopted by the royal family who discharges these duties on the king’s behalf.

6. Amidst all his studies, he used to dispense his duties as the chief servitor annually during Rath Yatra, except the year when he was abroad in 1975-76.

7. In spite of having served the Lord for so many years he realised that he was not completely spiritually awakened. After completing his masters in the field of law, he faced a dilemma of choosing between his responsibility of being the king and the tempting profession of being a lawyer.

8. According to Dibyasingh Deb, he attained religious and spiritual enlightenment because of three reasons: Saat grantha, Saatguru and Saatsanga.

9. Reading the Bhagavad Gita made him realise how futile his education was. He said to himself, “Everything else is secondary, serving the lord is primary”. All his scruples were cleared gradually and he acquired mental peace.

11.From being a Stephanian to having studied abroad, Gajapati Maharaja Dibyasingh Deb has now metamorphosed into a traditional, spiritually en-kindled human being whose whole life is dedicated to the service of Lord Jagannath, Lord Balabhadra and Devi Subhadra.