Here’s all you need to know about the sacred Debasnana Purnima! 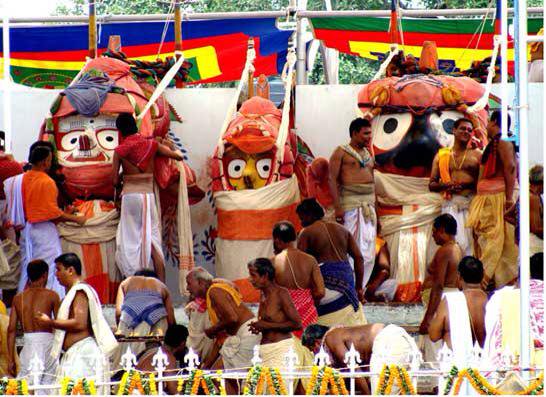 Debasnana Purnima marks the onset of one of the biggest festivals in the culture of Odisha for the year: the Ratha Jatra. It is an elaborate ritual that revolves around the holy trinity of Lord Jagannath, Lord Balabhadra and Devi Subhadra and includes bathing the idols and prepping them up for the chariot festival to be held on June 25, later this year.

Odisha Sun Times has put together a must-know trivia for this auspicious occasion:

Located on the frontier of the eastern side of the Jagannath temple in Puri, the Snana Mandap (the bathing pandal) measures 75 feet in length and is at such a height that devotees standing right outside the temple can get a clear view of the deities.

108 pots of water are drawn from the Suna Kua (well) of the temple of goddess Sitala, the previous night to bathe the deities. This well serves the sole purpose of containing water that is drawn only once a year for the Debasnana Purnima.

The 108 pots of water are made intensely fragrant with the addition of sandalwood paste, camphor, saffron and areca nut (gua).

4. The place of the deities

The holy trinity of Lord Jagannath, Lord Balabhadra and Devi Subhadra are actually tied to their places in the Snana Mandap to fix the idols to a stable spot.

After the Dhaadi Pahandi (seating the idols one after the other in a procession) of the deities, “perspiration” is wiped off the idols faces with camphor water.

After the scented water is poured on the deities, Chhera Panhara ritual of the Snana Mandap by the Gajapati King of Puri commences. Thereafter, the servitors perform the Hati Besa where Lords Jagannath and Balabhadra are adorned in elephant attires and Devi Subhadra with lotus flowers.

7. Open to all for darshan

The devotees then can have the open darshan of the deities aka Sahana Mela. Snana Purnima is the only time of the year when people, irrespective of their religion can get a glimpse of the holy trinity.

The holy trinity then, retire to the Anabasara Pindi (part of sanctum sanctorum) where they convalesce on falling sick after the bath. They are unavailable for darshan to the devotees for the next 15 days. This fortnight where the lords fall sick is called Anasara.

The illness of the deities is tended to with the Anasara Pana (a conconation made from forest products) whipped up by the descendants of Biswabasu, known as the Daitapatis. The Daitapatis are servitors who get the opportunity to serve the holy trinity only once a year, during Anasara.

The bathing of the idols leads to the colours getting washed away. Hence, they are again intricately painted and dressed on the 16th day and take their places on the Ratna Singhasan for darshan by devotees before proceeding for the Ratha Jatra.