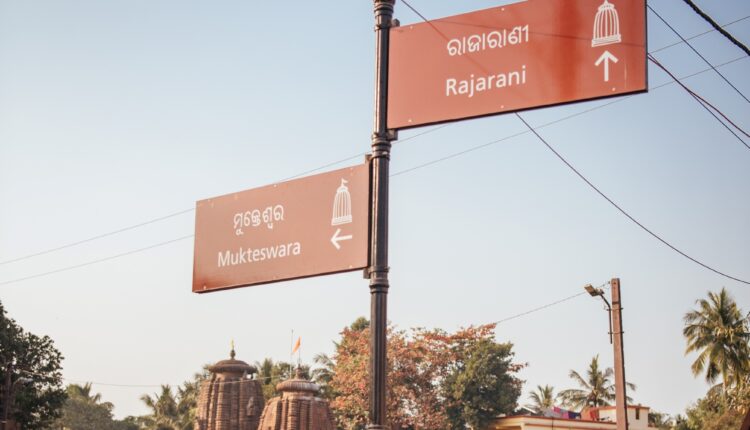 Bhubaneswar: The Heritage Signage Guidelines will further boost the overall beauty and attractiveness of heritage zones of Bhubaneswar, known for its fascinating cultural heritage, amazing temples and monuments by bringing a uniformity in signage design and installation. The signage based on the new guidelines will immensely help visitors, national and international tourists in finding and knowing about various monuments and archaeological sites in the capital city leading to generating awareness among people towards cultural heritage.

At present, different types of signages have been installed in Ekamra Kshetra by various agencies leading to visual clutter and absence of proper interpretation signage creates confusion among visitors. Therefore, in 2016, BDA had identified the need to develop guidelines for unified signage designs for special heritage zones as specified in CDP – 2030.

Welcoming the move, Prem Chandra Chaudhary, Vice-Chairman of Bhubaneswar Development Authority (BDA), said: “As the Old Town or Ekamra Kshetra of Bhubaneswar is one of the most prominent abodes of Lord Shiva, the Heritage Signage Guideline will bring in a perfect sync with the past and the present as this area is the essence of the State Capital. Similar Guidelines will also be prepared for other special heritage zones identified under CDP 2030 which will bring uniformity in information dissemination and to improve the overall visitor experience.”

He further informed that the BDA is also aiming to notify the Street Design Guidelines at the earliest under ODA Rules 2020.

“The Heritage Signage Guideline for Ekamra Kshetra is notified as per the Sub-Rule (1) of Rule 52 of the ODA (P&BS) Rules 2020 and shall be followed for all planning and design projects, building plan approval, building construction, addition, alteration, renovation, installation of signage, display boards, temporary installations and shop signage in the notified area,” said BDA Planning Member, Gouri Shankar Bhuyan.

The purpose of the signage guidelines is to provide clear, concise information which is relevant, aesthetically pleasing and consistent for all sites. This will help in promoting a unified appearance for all signages and eliminate the inconsistent, ineffective and unnecessary signs.

Hence, the new signages would be uniform heritage, interpretive, directional, building, business, orientation and facility signages in the zone. And heritage signage should be designed in a way that it respects the age, architecture and scale of historic buildings as well as the historic nature of the overall streetscape.

The colour, font, line spacing, paragraph style, arrows and icons, material and scale of all signs should be historically sensitive to the monument/building and the distinctiveness of the old town area. These signage guidelines will be adopted as part of the BDA (Planning and Building standard) Regulations.

“We felt there is a greater need to develop guidelines for unified signage designs for special heritage zones as specified in CDP – 2030 due to heavy congregation of monuments in the Old Town and surrounding areas of Bhubaneswar. Besides, there is a need for stronger bridge between tourism signage as per international standards and uniqueness of heritage resources existing within the city,” said Suparna Surabhita Das, Assistant Town Planner and Head of Heritage Cell of BDA.

After having consultation with various stakeholders from Government sector, local community, planners and heritage managers, the draft document was produced by the Heritage Cell in 2017. The document got approved by the 136th authority meeting of BDA in December 2017 and is also duly approved by State Government on 2020. The guidelines include key elements on standard principles of signage and recommendations on different types of signage to be installed within the Ekarma Kshetra special heritage zone.

As per the new guidelines, the following six types of signages will be put up at heritage sites:
1. Directional
2. Interpretative
3. Orientation
4. Facility signage
5. Business Signage
6. Building Signage

Notably, it was earlier notified that hoarding guidelines would be strictly followed in Ekamra Kshetra heritage zone which has been declared a ‘No Hoarding Zone’. While the existing hoardings from all government and private spaces in the area would be removed, advertisement through painting on the walls has been disallowed within the heritage zone. The advertisement designs need to follow the advertisement rules of the state.

As per provision of the Odisha Shops and Commercial Establishments (Amendment) Act, 2018, name of a business establishment in the area would be written in Odia language and if required, it can be written in English as a supporting text.