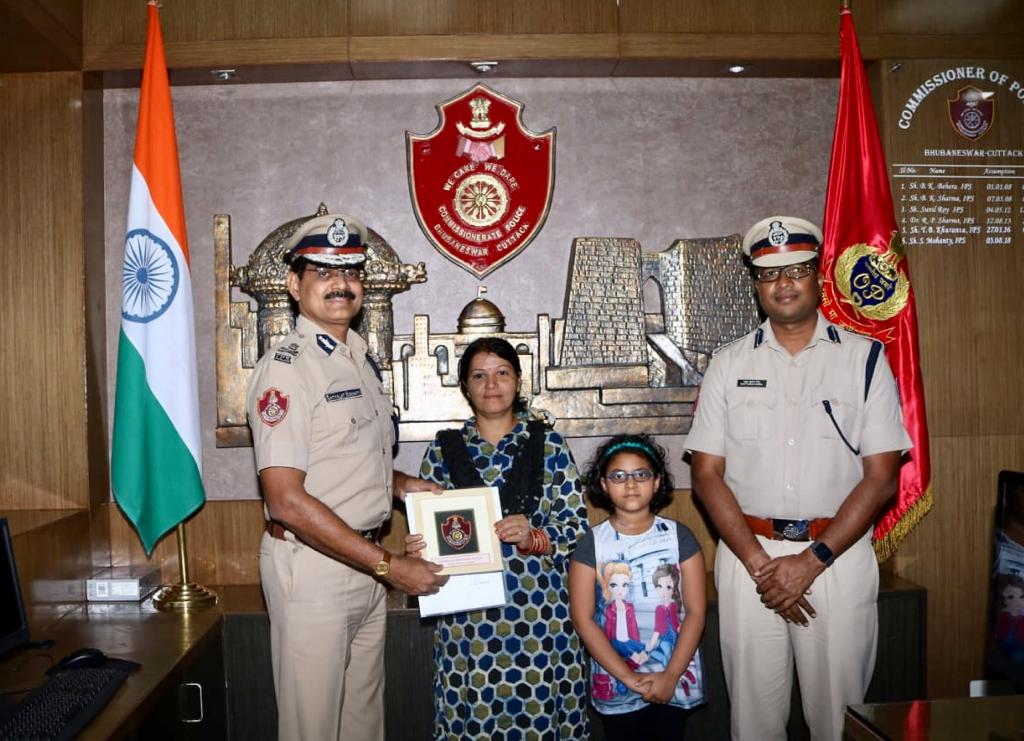 Bhubaneswar: Abhijita Mahapatra, a middle-aged woman in Odisha capital became the talk of the town today after she fearlessly took on a chain-snatcher and setting an example of courage for others to emulate. The Commissionerate Police felicitated the woman for her brave act, which was immensely lauded by one and all.

City Police Commissioner Satyajit Mohanty and Bhubaneswar DCP Anup Sahu felicitated the woman at commissionerate police office here. The brave lady was given a cash reward of Rs 5,000 and an appreciation letter.

“We have felicitated the woman for showing courage and foiling the snatching bid which helped us to catch the accused,” said Police Commissioner Satyajit Mohanty.

Chief Minister Naveen Patnaik also praised Abhijita for her courage: “Appreciate the courage of Abhijita Mohapatra in foiling the chain snatching attempt by two bike-borne attackers in Bhubaneswar and ensuring the arrest of one criminal. Her courageous deed is indeed praiseworthy,” the CM wrote in a tweet.

Appreciate the courage of Abhijita Mohapatra in foiling the chain snatching attempt by two bike borne attackers in #Bhubaneswar and ensuring the arrest of one criminal. Her courageous deed is indeed praiseworthy.

The incident took place in broad daylight at Malay Vihar in GGP Colony of Rasulgarh area under Mancheswar police limits.

According to police, two robbers on a bike asked Abhijita for an address while she was walking alone on the street. During the period, one of the robbers tried to snatch her chain. She overpowered one of the miscreants and finally caught one after a brief scuffle. Hearing her screaming, the locals and vendors near the place rushed to the spot and thrashed him for the crime. However, the biker managed to run away from the place.

However, another robber managed to flee the spot.

The woman sustained injuries in the scuffle with the the chain snatcher. She was admitted to a nearby hospital and later discharged after receiving first aid.

Incidents of chain, wallet and mobile snatching have been on the rise in the city. The snatching cases are being reported almost every passing day. In most cases, bikers gang either targets women or girls in during afternoon and late evening hours in various busy localities of city.