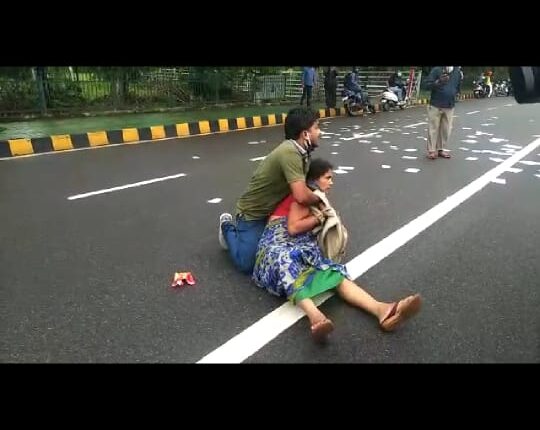 Bhubaneswar:  Palpable tension prevailed in capital city after a youth attempted to kill his mother with a knife in front of the Odisha Assembly near Lower PMG  here today.

However, police detained the two after a while and took both of them to custody for questioning.

The youth identified as Jitendra Pal of Nayagarh threatened to slit his mother Jharana’s throat with a knife in front of the Assembly giving a headache to the police personnel deployed there. Vehicular movement on the busy stretch was also disrupted for a while due to the nuisance.

Sources said Jitendra was taking his mother to a hospital here but later attacked her all of a sudden in the middle of the road in front of the Assembly in presence of police personnel. He was holding some leaflets and was uttering names of some ministers and political leaders alleging corruption.

However, the cops later managed to rescue the woman and take control over the  situation. They  later took both of them to custody for interrogation. While the exact reason behind the attack is yet to be ascertained, the mother clamed that the youth has psychiatric issue.

Over 8.5 lakh migrants returned to Odisha during COVID-19…