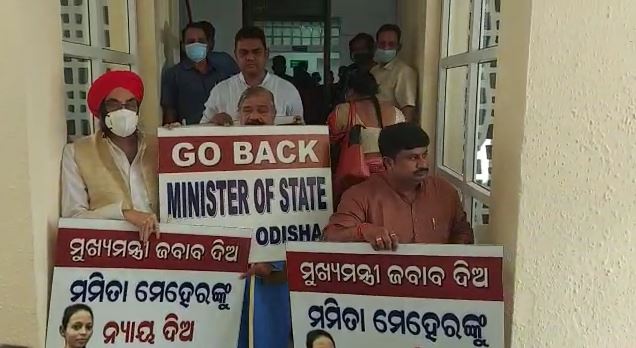 Bhubaneswar: The Winter Session of Odisha Assembly today began on a stormy note as Congress members resorted to a dharna at the entrances of the House protesting against Minister of State (Home) Dibya Shankar Mishra over the murder of schoolteacher Mamita Meher in Kalahandi district.

Before commencement of the House proceedings, a group of Congress MLAs led by Mohammed Moquim and Santosh Singh Saluja sat on a dharna at two entrances of Assembly in a bid to prevent the Minister from entering the House. Shouting slogans and holding placards that read “Go back MoS (Home)” and “Give Justice to Mamita Meher”, the legislators demanded an answer from Chief Minister Naveen Patnaik over the issue.

Kantabanjhi MLA Santosh Singh Saluja said, “We had strongly demanded dismissal of Minister Dibya Shankar Mishra for his alleged link with Govind Sahu, the prime accused in Mamita Meher murder case. Father of the deceased had even alleged that the Minister used to visit the school and spend night there, frequently. However, no action has been taken against him yet. The CM, who always claims not to tolerate injustice and corruption in the state, has remained silent over the issue,”

We sat on dharna at the entrances in a bid to not let the accused Minister enter the Holy House as his presence will desecrate the sanctity of the Assembly.

On the other hand, Opposition BJP met the Speaker and urged him to not allow the accused MoS (Home) attend sessions of the House.

Later, several BJD MLAs took out a protest rally from the Assembly to Governor’s residence alleging the Centre’s negligence in allotment of houses to Odisha under Pradhan Mantri Awas Yojana (PMAY).

The party alleged that the Centre has provided only five lakh houses as against the requirement of 13 lakh houses to the state, which is prone to natural calamities. The CM has urged the Centre umpteen times to allot the remaining eight lakh houses but the latter has not paid any heed to the demand.

In a latest development in Mamita Meher murder case, the Orissa High Court (HC) yesterday directed retired District Judge  Justice ABS Naidu to supervise the probe into incident. The court’s direction came after the state Government, few days ago, requested it to nominate a sitting or retired judge of the Orissa HC or a District and Sessions Judge to monitor the investigation.