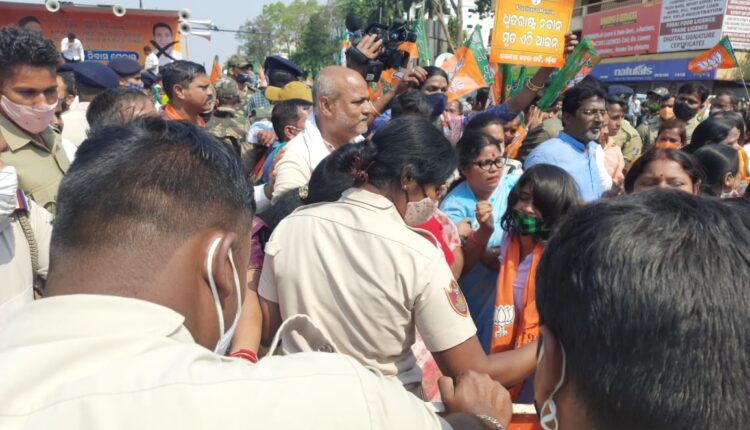 Bhubaneswar: Palpable tension prevailed near Sishu Bhawan Chhak in the state capital after hundreds of BJP leaders and workers had a scuffle with police while marching towards Naveen Niwas as part of their protest over the sensational Mamita Meher murder case.

On the other hand, another group of  the protesters sat on a dharna on the stretch shouting anti-Government slogans. They slammed the state Government over the issue of women’s safety.

Later, the cops detained several workers, including party Spokesperson Lekhasri Samantsinghar and district president Babu Singh from the protest spot. The agitators alleged that four months have passed since the murder of Mamita Meher took place in Kalahandi district but no action has been taken till date and the CM is shielding the perpetrators.

“Minister Dibya Shankar Mishra, who is accused in the murder case, has not been arrested yet. Chargesheet has not been filed against main accused Govind Sahu.  The CM has failed to give justice to the victim girl. But when we are protesting seeking justice for the girl, the police are treating us like petty criminals. The women cops are also misbehaving with BJP workers,” said Lekhasri.

Earlier in the day, around 25 platoons of police force were deployed to avoid any unpleasant situation during the mass protest.

The murder of 24-year-old Mamita Sahu of Jharni village under Turekela block of Balangir district had sent shockwaves across the state. While Mamita was working as a teacher at the Sunshine English Medium School at Mahaling in Kalahandi district, prime accused Govind Sahu was the management committee president of the educational institution.

On October 8, Mamita went missing. Alleging involvement of Govind Sahu, her family members lodged a complaint with police. On October 19, skeletal remains of the girl were exhumed from an under-construction stadium of the school in presence of police.