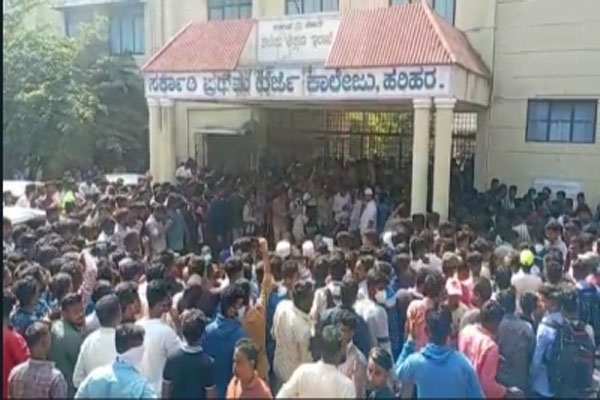 Davanagere:  Amid the Karnataka High Court hearing the hijab matter, more incidents of violence were reported from an educational institute in the state on Tuesday.

The police fired teargas shells and carried out a baton charge to quell the violent mob in the Harihar First Grade College campus in Davanagere district.

Following the violence, the district administration has clamped prohibitory orders in Davanagere and Harihar twin cities.

According to eyewitnesses, several policemen and students were injured in the violent incident. Many two-wheelers have been damaged and a tense situation prevails in the Davanagere town. Police have been deployed at all sensitive places.

Local Congress MLA Ramappa has rushed to the spot to pacify the students. However, outraged students had a heated debate with the MLA.

As many as 2,500 students study in Harihar College. The trouble started when a group of people came to the college in support of the hijab. The group got into an argument with the students wearing saffron shawls and soon the situation turned violent.

Sensing the danger, the police rushed to the spot and asked the mob standing outside to move out of the college area. The group of outsiders did not budge and refused to move. They claimed that they have to protect the hijab-wearing students. This was objected by the other group of students wearing saffron shawls and soon stone pelting began.

To quell the mob, police fired teargas and carried out baton charge.

The town had witnessed protests on Monday night also after an objectionable social media post. The incident turned communal when ‘Pakistan zindabad’ slogans were raised. The police however brought the situation under control.

The tense situation continued in Davanagere Pre-University College as there was confrontation between outsiders and students. The police taking no chances resorted to lathi charge and dispersed the crowd.

Meanwhile, the High Court is hearing the matter of Hijab row and it is expected to give its verdict later in the day. The government has stated that it would come out with a clear cut order on wearing of hijab along with uniform once the court rules on the matter.