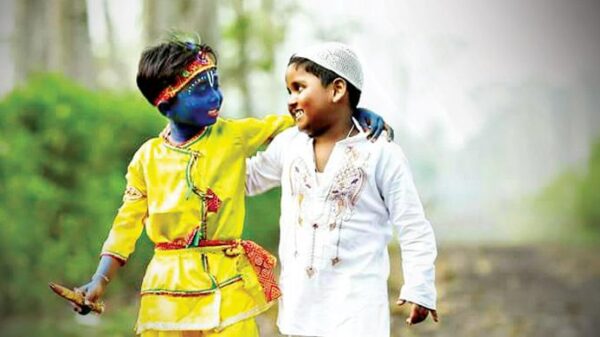 Bengaluru: Amid social unrest and boycott calls of Muslim traders and sculptors, Bengaluru — the Silicon Valley of India — is all set to celebrate annual Karaga festival, known as a symbol of harmony and integrity between Hindus and Muslims for over 200 years.

Preparations are on for the full-scale celebration on April 16, despite the pressure from Hindu organisations to drop rituals involving Muslim community members and dargah from the festivities. The Karaga Utsava Samithi (Karaga Festival Committee) has stated that no matter what, all the traditions would be continued during Karaga festival.

As part of the festivities, as per the traditions, a group of Muslim religious leaders and moulvis have arrived into the Sri Dharmaraya Swamy temple on Thursday and blessed Karaga Utsava Samithi members. They gave an invitation to the committee to take the procession to Mastaan Saab Dargah located in Balepet of Bengaluru.

Karaga Utsava Samithi President Satish stated that the festival would be carried out in the same way as earlier and there would be no change. The procession would go to the Mastaan Saab Dargah in Balepet – as per the tradition of hundreds of years. “The moulvi of Mastaan Saab Dargah had come to the temple and spoken about it,” he stated.

BJP MLA Uday Garudachar has also pledged his support for keeping the traditions that are symbolic of Hindu-Muslim integration intact. “The question has surfaced regarding whether the Karaga procession should go to Mastaan Saab dargah or not. This tradition has been followed for hundreds of years and it should be maintained in the same way,” he said.

MLA Garudachar has further stated that as a Hindu he would the Karaga procession to go to Mastaan Saab dargah. The management of dargah is also ready for the worship of Karaga deity. India is a secular country and no attempt should be made to spoil the peace and harmony, he added.

Hindu activists have maintained that the ritual of Karaga procession visiting dargah was imposed forcefully on Hindu community and it should be stopped.

Karaga festival is held at Shri Dharmarayaswamy temple in Bengaluru for nine days. Just after dusk on Karaga day, a priest dressed in female attire leads a colourful procession. Hundreds of community members of thigalars, a warrior community, including children, will take part in the procession flashing swords. Women and devotees carry earthen pots on their heads.

The priest carries a flower-bedecked pyramid and leads the procession. The procession visits the tomb of an 18th century Muslim saint at the Mastaan Saab dargah. Karaga festival is celebrated each year to mark the return of Draupadi in the form of Adishakthi.

The priest carrying Karaga, symbol of Adishakthi, will take three rounds of pradakshina (the rite of circumambulating in a clockwise direction) inside the dragah. The Muslim community members will worship the Karaga deity. People of all castes take part in the Karaga festivities.

Last two years, the Karaga festivities were kept as a low-key affair due to Corona pandemic. However, this year, amid hijab, halal rows and series of disturbing developments in the state, Bengaluru, known as the global capital of IT-BT companies is looking ahead for the festival of ancestors which symbolises communal harmony and peace.

Animated show on tennis legend Leander Paes in the making