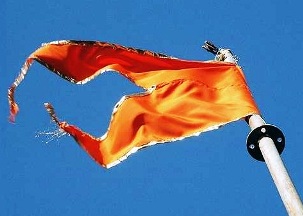 The latest reported observations of the Vishwa Hindu Parishad (VHP) supremo, Ashok Singhal, echo what the Rashtriya Swayamsevak Sangh (RSS) ideologue, M.S. Golwalkar, said in his 1939 publication, “We, or Our Nationhood Defined”. In it, the Hindutva icon had given an outline of what the minorities can expect in India.

“The foreign races in Hindusthan,” the RSS guru had written, “must either adopt the Hindu culture and language, must learn to respect and hold in reverence Hindu religion, must entertain no ideas but those of glorification of the Hindu race and culture … or may stay in the country, wholly subordinated to the Hindu nation, claiming nothing, deserving no privileges, far less any preferential treatment, not even citizen’s rights.”

Seventy-five years later, Singhal’s statement shows that little has changed so far as the saffron worldview is concerned. In an interview to the Hindustan Times, he has said that the “Muslims will be treated as common citizens – nothing more, nothing less. And they must learn to respect Hindu sentiments. If they keep opposing Hindus, how long can they survive?”

Unlike Golwalkar, the VHP leader is willing to concede citizen’s rights to Muslims, but the precondition of respecting Hindu sentiments remains. He has also issued an unambiguous threat by linking the “survival” of the Muslims to the need to defer to the Hindus.

Singhal has imposed a caveat as well. It is that the Muslims must forsake their claims on the Ayodhya, Varanasi and Mathura mosques and accept a uniform civil code. By reviving the demand for the Varanasi and Mathura shrines along with that of Ayodhya, Singhal has recalled the slogan which was raised by the saffron cadres after the demolition of the Babri Masjid in Ayodhya: “Yeh to pehli jhanki hai, Kashi, Mathura baki hai.” (This is only the first instalment; Kashi and Mathura will be next).

Following a carrot-and-stick policy, the VHP leader has promised to give the Muslims “love” – another change from Golwalkar – and pledged not to claim any other mosque (for demolition) even though there are thousands built on the “ruins of temples” which were destroyed in medieval times.

This show of forbearance is reminiscent of another chilling slogan of the 1990s: Teen nahin, teen hazar, nahin rahegi ek mazar. (Not three but three thousand, not a single holy place will remain intact.)

In the interview, Singhal has given the saffron brotherhood’s interpretation of Narendra Modi’s success. It was based, according to him, essentially on the “undercurrents” of the Ram temple and Godhra issues over which development and governance acted as a veneer. The next step is to do “what we want to do” though by “constitutional means”.

If these observations are read together with Singhal’s earlier hope that only Modi can prevent the “total Islamization” of India, then it will be obvious that while the people in general are expecting an economic revival, the saffron lobby wants the implementation of its Hindu agenda.

Evidently, the Bharatiya Janata Party (BJP) will have to undertake a careful balancing act in order to reconcile the two – if it wants to. Perhaps, it will start with a few sops to the fundamentalists by, say, initiating moves to introduce the uniform civil code and hold a wide-ranging discussion on Article 370 of the constitution which confers special status on Kashmir.

It has already appointed an RSS sympathizer to the post of chairman of the Indian Council of Historical Research who may resume former human resource development minister Murli Manohar Joshi’s unfinished task of rewriting Indian history.

But the BJP cannot be unaware that too many pro-active steps will carry the danger of upsetting the apple-cart. Having come to power under exceptional circumstances, viz, the Congress’s collapse under an inept leadership, the BJP cannot afford to throw it all away by following the diktats of the extremists in the Sangh Parivar.

Only the BJP knows whether they are paper tigers or have real teeth. Outsiders have little clue although their capability to set off riots is not unknown. However, having depended heavily on the RSS and its non-political affiliates during the election campaign, the BJP will be wary of displeasing them now that it is in power.

It was during the Ramjanmabhoomi movement in the 1990s that there was a convergence of views in the Sangh Parivar between the hardliners and the moderates. The latter were mostly on the defensive, however, because they were small in number even if they were led by the tallest leader in the Parivar, Atal Bihari Vajpayee.

But because of his moderation, Vajpayee was never a favourite of the RSS, whose leader at the time, K.S. Sudarshan, asked him to retire from public life in 2005 along with L.K. Advani, who had lost much of the fiery zeal of the 1990s following his experience in the Vajpayee government between 1998 and 2004.

Modi, in contrast, is an “ideal swayamsevak”, according to Singhal. The saffron zealots will, therefore, expect him to fulfil their dream of establishing a Hindu rashtra (nation). How they will react if they are disappointed, as in Vajpayee’s time, is the million dollar question.

*Amulya Ganguli is a political analyst. The views expressed are personal. He can be reached at [email protected]