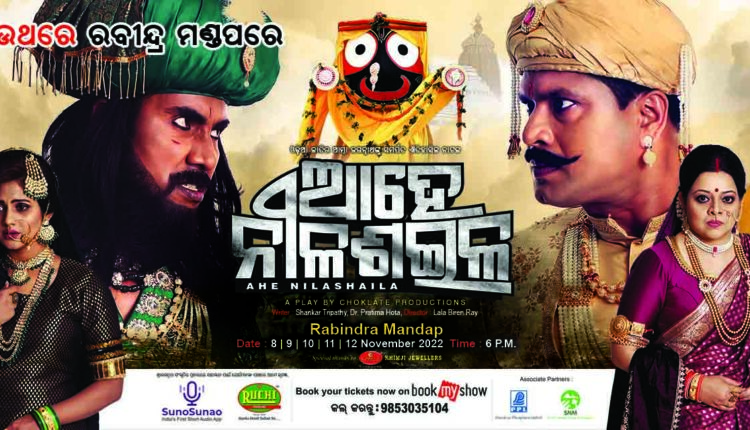 Bhubaneswar: Historical play ‘Ahe Nilashaila’ of Choklate Productions will be staged for the third time in the capital city here from November 8 to November 12.

Earlier, the show staged at Rabindra Mandap here received an unprecedented response for the power-packed performances.

The show gave theatre lovers an experience of lifetime. The play, directed by eminent theatre director Lala Biren Ray, was first staged in the city here for four days starting April 7. On popular demand, the drama was again staged from July 8 to July 10.

After its roaring success in the temple city here, the troupe was invited to perform in the Garden City of Bengaluru on the opening day of Odisha Utsav-2022 on October 14. Choklate Productions in association with Odisha Sangeet Natak Akademi staged the play at Rabindra Kala Kshetra in Bengaluru.

“As I missed the opportunity to watch the historical drama on earlier occasions, I will make sure to watch it in Bhubaneswar along with my family members. It will be one of the best gifts to my parents, I guess,” expressed a theatre buff.

The Odias living in the IT city went home with a memorable experience of witnessing the historical drama. Apart from warm welcome, the troupe was given an even more emotional send off.

Online tickets for the play are available on BookmyShow. Besides, people can also purchase the same offline by contacting on 9853035104.

The play depicts how the then Gajapati king Ramchandra Deva had to undergo untold miseries for protecting Lord Jagannath from the evil eyes of Naib Nazim. Its story is partially inspired by Sahitya Akademi Award-winning Odia author Surendra Mohanty’s famous novel ‘Nila Saila’.

The script of the play has been written by eminent playwrights Shankar Prasad Tripathi and Dr. Pratima Hota. Sunosunao and Ruchi are the partners for the play while PPL and SNM Group are the associate partners.