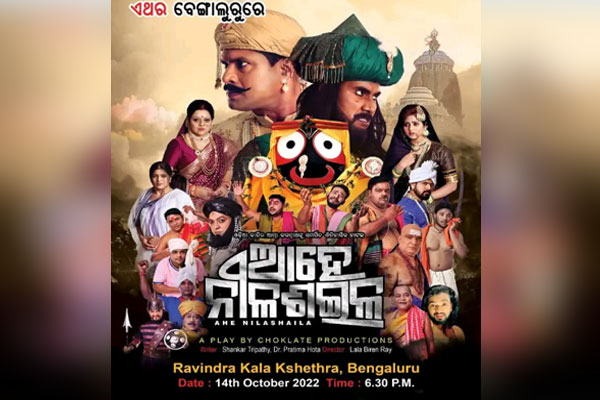 Bhubaneswar: Historical play ‘Ahe Nilashaila’ of Choklate Productions is scheduled to be staged on the inaugural day of Odisha Utsav in Bengaluru on October 14.

The play, which is dedicated to Lord Jagannath, would be staged at Ravindra Kala Kshethra in Bengaluru at 6.30 pm.

The script of the play has been written by Shankar Tripathy and Dr. Pratima Hota while Lala Biren Ray is the director of the play.

Notably, this is the first occasion when the popular play would be staged outside Odisha.

“While conceptualizing the play, we had not expected that it would evoke huge response from the audience. We have already staged the play for eight times in Bhubaneswar in a year. Now, we are going to stage the play in Bengaluru during Odisha Utsav, hosted by the Culture Deaprtment of Odisha, on October 14. I request the Odias residing in Bengaluru to watch the play,” said Sambad Group’s Executive Director Tanaya Patnaik.

The play depicts how the then King Gajapati Ramchandra Deva had to undergo untold miseries for protecting Lord Jagannath from the evil eyes of Naib Nazim. Its story is partially inspired by Sahitya Akademi Award-winning Odia author Surendra Mohanty’s famous novel ‘Nila Saila’.

‘Ahe Nilashaila’ to be showcased once again, on…