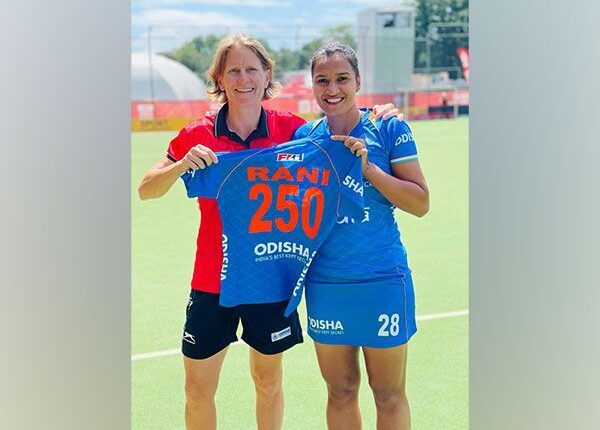 Rani, who has been on a long injury layoff after the Tokyo Olympic Games 2020, is back in the reckoning with her first appearance in over ten months for Team India.

An emotional Rani, who was feted by Indian Women’s Team chief coach Janneke Schopman ahead of the game, said, “It has been a very challenging year for me dealing with the prolonged injury but the one thing that kept me going was the desire to wear India jersey once again.”

“I have worked very hard for this moment and I am very grateful to Hockey India and Sports Authority of India for their continued support and allowing me to work with the best physio during my rehabilitation process. I am also very grateful to the entire coaching staff and my teammates who have constantly motivated me, supported me over the past year.”

“This is a very special moment for me. I consider this as a second innings in my career and it is doubly special that I am making a comeback to play my 250th match for the country against a strong opponent like Belgium. It is indeed a milestone to remember,” added Rani.

In a career spanning over 12 years, Rani has led the Indian team to many successes including the historic fourth place finish at the Tokyo Olympics last year. She made her international debut in 2009 Champions Challenge at a tender age of 15, becoming the youngest player to represent the national team.

Hailing from Shahbaad Markanda in Haryana, she became the first Indian Women’s Hockey player to be nominated for the FIH Women’s Young Player of the Year Award.

She was also given the “Best Young Player of the Tournament” award at the 2010 Women’s Hockey World Cup in Argentina. It was under her Captaincy that India created history as they won the Women’s Asia Cup in 2017 after 13 long years. Under her Captaincy, the team qualified for the Quarter Finals of the Vitality Hockey Women’s World Cup London 2018 and also won the Silver Medal at the 2018 Asian Games.

Rani was also felicitated with the Arjuna Award in 2016, World Games Athlete of the Year 2019, Hockey India Award for Best Women Player of the Year 2019, Rajiv Gandhi Khel Ratna in 2020 and Padma Shri Award 2020. She had also led the team to victory in the 2019 FIH Series Finals and was a catalyst in ensuring the Indian team made it to back-to-back Olympic Games with her stupendous performance in the FIH Olympic Qualifier in front of home crowd in Bhubaneswar where they beat USA.

Congratulating Rani, chief coach Janneke Schopman said, “Rani’s incredible journey from a very difficult economic circumstances back home in Shahbaad to becoming one of the most successful hockey players of her time has inspired many young players in India. She has worked very hard over the past year to earn back her India jersey, after a prolonged injury break. She is a very determined and hardworking player and I wish her the very best as well as congratulate her on achieving this incredible feat.”