Hockey Men’s World Cup venue in Odisha to be ready by Oct: Official 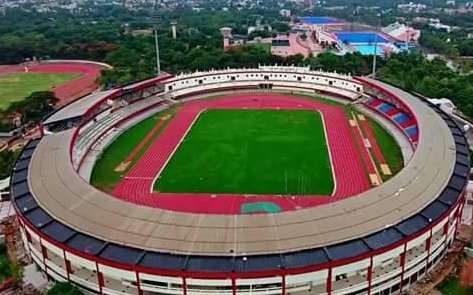 Bhubaneswar: Kalinga Stadium in Odisha capital will be ready by October to host the much-awaited Hockey Men’s World Cup beginning on November 28 this year.

Chief Secretary AP Padhi informed this to the media after heading the fifth Executive Committee Meeting for organisation of the mega event.

“About 90 per cent work related to renovation of Kalinga stadium will be completed by September and stadium will be ready by second week of October,” Padhi told reporters.

The infrastructural work at the Kalinga Stadium includes the up-gradation of seating capacity to 15,000. The stadium will also get two brand new pitches. The flood lights at both main pitch and the practice pitch too have been upgraded while the entire main stadium is being given a face-lift with wider roads, new gates, permanent CCTV cameras for safety point of view.

A delegation of FIH (International Hockey Federation) arrived here on Monday for a two-day visit to ensure the preparations are up to speed in the lead-up to the prestigious event.

Accompanied by officials from the host federation Hockey India, FIH Event Director Gabrielle van Zwieten had extensive meetings with Vishal K Dev, Commissioner-cum-Secretary to Government, Department of Youth Services and Sports and representatives from various departments of Odisha government, to discuss the overall progress of work.

The FIH delegation has inspected the Kalinga Stadium and expressed satisfaction with the progress of work.

“I am delighted with the progress of work here at the Kalinga Stadium and I am quite confident the venue will be ready well within the stipulated time. The keenness of the Odisha Govt and Hockey India to deliver to perfection and leave no stone unturned in their preparations to host the biggest hockey event is worth a mention and I am confident the hockey fraternity will witness a spectacular event starting this November,” Gabrielle van Zwieten told reporters after visiting the venue.

Hockey India Chief Executive Officer (CEO), Elena Norman, who was also a member of the delegation, has maintained that Bhubaneswar is now one of the best places to organise the hockey world cup.

“Bhubaneswar is one of the best venues for hockey in the country today. It is not just the passion the people of Odisha have for the sport that makes us want to bring big international events here but it’s also the pro-activeness of the Odisha govt in terms of providing world-class facilities to ensure visiting teams, officials, spectators from across the globe get the best experience,” said Norman.

She futher stated that they have made regular visits to Bhubaneswar and happy to note that the infrastructural work is on schedule.

Vishal K. Dev, Commissioner-cum-Secretary of  Department of Sports & Youth Services, government of Odisha, also inspected the preparedness of the stadium.

“We are all quite happy and satisfied with the ongoing preparations for the Hockey Men’s World Cup. In terms of infrastructure, apart from the new turf being laid at the hockey ground, we have upgraded the flood lights of both the practice and main pitch. We are further giving the entire stadium a face lift by widening the roads, installing a new gate and permanent CCTV cameras from safety point of view,” said Dev.

He also informed that a number of campaigns are lined up which will begin from next month to create a buzz about the world cup nationwide.”Our aim is to permeate the image of Odisha globally through the Hockey Men’s World Cup Bhubaneswar 2018. All the state departments are working together to expedite the same,” the Secretary added.

The Hockey World Cup will witness 16 top teams in the world vying for the top spot. A total of 36 matches will be played from November 28 to December 16.

The opening match of the tournament will see World No. 3 Belgium take on World No. 11 Canada, while host nation India will also open their campaign on the same day against South Africa.

he knockout matches will take place on December 12, 13, 15 and 16 the teams will look to become the Champions of the prestigious quadrennial event which was won by Australia in 2014.

SpiceJet to operate sea planes on 3 routes in Odisha!