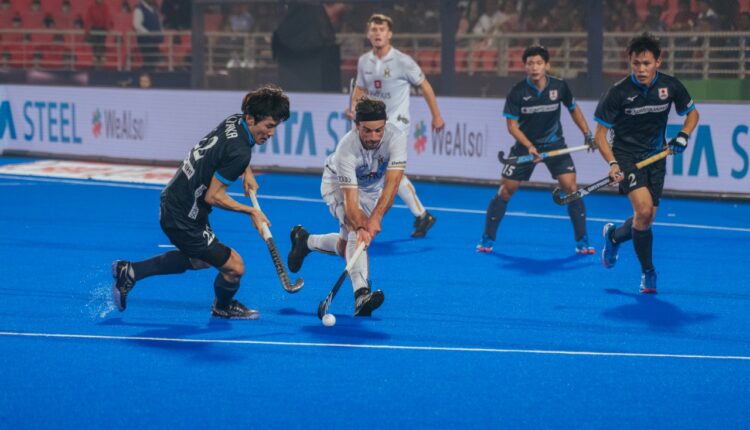 Rourkela: Belgium registered an impressive 7-1 win over Japan to top the Pool B and book the quarterfinals spot at the FIH Odisha Hockey Men’s World Cup 2023 at the Birsa Munda International Hockey Stadium, here on Friday.

During the game, Belgium’s star striker Tom Boon opened his account in the World Cup with a 5-goal performance, taking his team’s goal difference to +11.

With a draw in the previous game against Germany, Belgium needed a big win against Japan to try and seal their spot at the top of Pool B and earn direct qualification to the quarterfinals and a first half hat trick by Boon gave them a 4-goal lead.

By the end of first half, Belgium increased their goal difference to +9 and with another 30 minutes, they further extended their lead over Germany, who had a +3 goal difference with one game to go in the final match of the day against Korea.

Japan had a much better start to the second half, keeping Belgium out in the 3rd quarter and scoring their first of the game early in the 4th. But Belgium had a much better finish to the game scoring thrice in the final 10 minutes, including 2 more goals for Tom Boon, to win with a 6 goal margin and bump their overall goal difference to +11.

Tom Boon who became only the 4th ever player to score 5 goals in a World Cup game, was awarded player of the match.

“I think after scoring no goals in the first quarter, it’s good to get 7 goals and a +6 goal difference in the final 3 quarters. Looking forward to playing in the knockouts going forward,” he said.