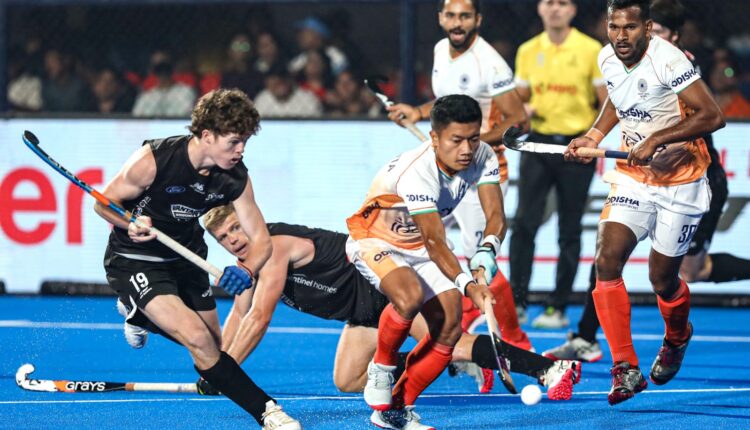 Bhubaneswar: India messed up a plethora of chances and a 3-1 lead midway through the third quarter to allow New Zealand to come back and hold them 3-3 in regulation time and then fluffed a few more chances in the shoot-out to lose 4-5 in sudden death in their Crossover stage match and crashed out of the FIH Odisha Hockey Men’s World Cup, here on Sunday.

It was a story of errors and missed chances as India held a 2-0 lead just before half-time but allowed New Zealand to score a late goal to make it 2-1 at the breather. On resumption, the Indians extended the lead to 3-1 but poor marking in the circle and basic error while defending allowed New Zealand to score two quick goals and hold Graham Reid’s side 3-3 at the end of 60 minutes of play.

India looked down and out when Abhishek and Sukhjeet Singh messed up their chances in the shoot-out after skipper Harmanpreet Singh and Raj Kumar Pal had converted the first two attempts. New Zealand converted their first three attempts through Nic Woods, Sean Findlay and Hayden Phillips and led 3-2.

PR Sreejesh then pulled off three successful saves to give India the advantage and Sukhjeet Singh converted the fifth attempt under tremendous pressure as the shoot-out ended 3-3.

Sam Findlay scored for New Zealand and Raj Kumar Pal saved India by converting his attempt. Kishan Pathak who came in for the injured Sreejesh thwarted Hayden Phillips but Sukhjeet failed to convert as India lost another opportunity to seal the win.

Sam Lane then scored for the Black Sticks with an easy attempt past Pathak to make it 5-4 for New Zealand. Trying to save the match for India, Shamsher Singh failed to score and India embraced defeat from the jaws of victory.

New Zealand thus set up a quarterfinal clash with Belgium while India will now move to Rourkela for the playoff matches for the 9-16 spots.

Pathak had earlier rescued India by pulling off some superb saves in the fourth quarter as New Zealand exerted tremendous pressure despite at one juncture being reduced to 10 men after Nick Ross got a yellow card.

The Indians had themselves to blame as they lost their nerve at crucial junctures of the match, played passively, and made silly errors to allow New Zealand to fight their way back and then overcome the Olympic bronze medallists in the sudden death.

India had started the match and made some good attacks in the first quarter but only had a green card for Manpreet and a penalty corner to show.

But Lalit Upadhyay gave them the lead in the 17th minute when he slammed home a superb pass by Aakashdeep Singh, who made a fine solo run to the final third.

They could have added more goals but failed to capitalise on two penalty corners in the 21st and 23rd minutes, Harmanpreet Sing failing to trouble New Zealand goalkeeper Dominic Dixon. But Sukhjeet Singh shot off a rebound on their fourth penalty corner to make it 2-0 in the 24th minute.

However, poor marking inside the shooting circle allowed New Zealand to pull one goal back as Simon Child made a fine pass of a run to the backline and Sam Lane, unmarked at the penalty spot, deflected it in for an easy goal in the 28th minute.

India dominated the third quarter and earned a penalty corner in the 38th minute but Harmanpreet could not convert. Two minutes later, they earned two successive PCs and in the second, Varun Kumar outwitted Dixon and slammed the ball between his legs to make it 3-1 for India.

The Indians lost focus once again as they allowed New Zealand to score once again when Nilam Sanjeep Xess was pulled up for being too close to the attacker trying to control an overhead pass and a PC was awarded. Kane Russell proved why he is so highly rated as a drag-flicker by placing it between Sreejesh and the defender on the goal line.

India went into the fourth quarter leading 3-2 but the Black Sticks were on a high as they attacked in waves to put the Indian defence under pressure. One such attack resulted in New Zealand earning their second penalty corner and though Pathak had blocked Russell’s drag-flick, Findlay struck off the rebound to make it 3-3.

India had a good chance midway through the final quarter but the goal was disallowed because of a foul before the final pass. New Zealand keeper Dixon pulled off a couple of good saves and India also had to thank Pathak for blocking efforts by Simon Child, Sam Lane and Sam Hiha.

But in the end, his heroics and that of Sreejesh in the shoot-out proved futile as India lost in sudden death.

In all, India earned 10 penalty corners but could convert only two while the Black Sticks converted both their PCs.

Strong indications of AQI improvement, actions under Stage I & II to remain: CAQM