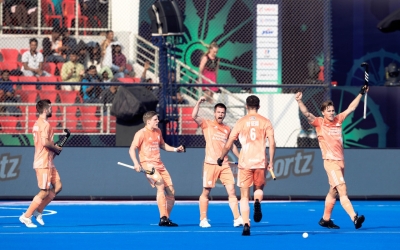 Rourkela: Seasoned Thierry Brinkman struck a brace of goals as the Netherlands romped to a 4-0 victory against New Zealand in their Pool C encounter in the FIH Odisha Hockey Men’s World Cup at the Birsa Munda Hockey Stadium here on Monday.

Brinkman scored twice in the first quarter, slamming home field-goals in the 2nd and 12th minutes of the match. Koen Bijen (19th min) and Tjep Hoedemakers (54th min) scored the fourth goal for the Dutch who won the title in 1973, 1990 and 1998.

The Netherlands had started their campaign for their fourth title with a 4-0 win against Malaysia. On Monday, they handed the same verdict to New Zealand, who had scored a narrow 3-1 win against Chile in their opening match, to virtually seal a place in the quarterfinal.

They have six points from two wins while New Zealand and Malaysia, who defeated Chile 3-2 earlier in the day, have three points each from two matches. Chile have lost both their matches so far and are yet to open their account.

The Netherlands came out with guns blazing and Brinkman made the most of their initial attack as he scored in the 2nd minute from a superb attack. New Zealand could have levelled the score in the 4th minute but they failed to capitalise on their first penalty corner.

Brinkman did not make any mistake in the 12th minute too as he scored another field goal to make it 2-0 for the team ranked third in the World. The Dutch earned their first penalty corner just a minute before the end of the first quarter but that went abegging.

The Netherlands dominated the second quarter too. They scored their third goal in the 19th minute when Koen capitalised on a good attack. They earned their second PC in this quarter but that too did not produce any goal.

After a goalless third quarter, Tjep Hoedemakers struck the fourth goal for the Netherlands just six minutes from the final hooter.

The Black Sticks made some attacks in the second half but could not even earn a single PC as the Netherlands emerged easy winners.

The Netherlands have to beat minnows Chile in their final Pool C match on Thursday to top the standings with an all-win record. New Zealand and Malaysia will play on Thursday to decide their position in the crossover stage. They do have a theoretical chance of clinching the direct berth in the last eight but will not only have to win their match by a big margin but also hope for Chile to beat the Netherlands.