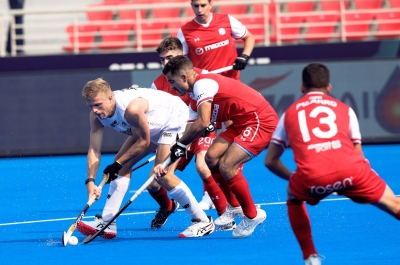 Rourkela: The New Zealand men’s team opened their campaign in the FIH Odisha Hockey Men’s World Cup 2023 with a 3-1 win over Chile in a Group C match at the Birsa Munda International Hockey Stadium, here on Saturday.

Sam Hiha struck a brace of field goals while Sam Lane contributed the third as the Black Sticks scored all three of their goals in the first half. Ignacio Contardo scored the lone consolation for Chile in the 49th minute of the match.

New Zealand are ranked 9th in the World while Chile are 22nd. The Black Sticks would have loved to have won the match by a bigger margin but that was not to be.

Sam Lane opened the scoring for New Zealand as he scored a field goal in the ninth minute. New Zealand earned two penalty corners in quick succession but could not convert them.

However, they could not be denied for long and in the 11th minute, Sam Hiha made it 2-0 by scoring soon after their second penalty corner. Chile had their first goal at the New Zealand goal when they earned their first penalty corner in the 13th minute but they failed to capitalise on it.

The New Zealanders made it 3-0 in the second quarter when Sam Hiha scored his second goal of the day. Chile earned two penalty corners in this quarter but a goal eluded them again.

The South American team created better chances in the third quarter as they earned two penalty corners. New Zealand were reduced to 10 men when Sean Findley was shown a green card and was sent to the sin bin.

New Zealand launched some good attacks in the fourth quarter but could not score any more goals. They bagged four PCs in this quarter but a goal continued to elude them.

Though Contardo had reduced the margin for Chile in the 49th minute and they created some good attacks, in the end, their efforts proved futile as the Black Sticks emerged victorious.

The three points they bagged augur well for New Zealand in the race for a place in the quarterfinals with World No 3 Netherlands and 10th-ranked Malaysia the other teams in Group C.