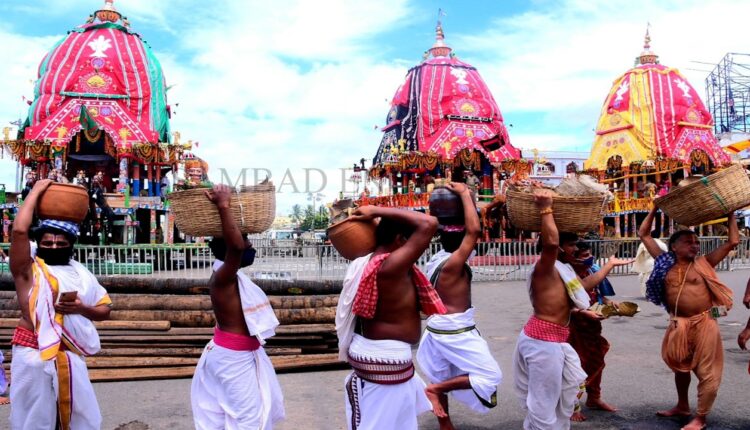 Puri: Even as Lord Jagannatha along with elder brother Lord Balabhadra and sister Devi Subhadra moved to ‘Janmabedi’ (birth place) at Gundicha Temple today, the final destination of Ratha Jatra, devotees were deprived of witnessing the rituals of their humane gods. The spoiler was Covid-19 disease this year as well like 2020.

Like everyone else, the Lord Jagannatha and His siblings love their birth place. This is the reason why today evening the Gods proceeded from their chariots in the ‘Adapa Bije Pahandi’ to the Gundicha temple.

Amid the hooting trumpets, jingling of gongs and recital of verses from the Gitagovinda, the Holy Trinity was welcomed to the ‘Adapa Mandap’ at the aunt’s place. But, alas, devotees couldn’t see the auspicious moments and gain the benefits equal to hundreds of sacrifices.

Servitor and Writer Purna Chandra Gochhikara said, “As per the ‘Niladri Mahodaya’, devotees can gain benefits by paying obeisance to the Gods at ‘Adapa Mandap’ in Gundicha Temple once equivalent to the benefits of 10,000 times darshan of the deities at the Shree Mandir. Scriptures say ‘Gundicha Mandap’ or ‘Adapa Mandap’ is the most favourite place for Lord Jagannatha in the Earth.

Gochhikara added it is believed that those who pay obeisance to the Holy Trinity at ‘Adapa Mandap’ go directly to the ‘Baikuntha Dham’.

During earlier days, wives of servitors were observing nine-day ‘brata’ to gain benefits. But, with the passing of time, the tradition has become almost obsolete with a handful of women observing the ‘brata’.

Moreover, due to the Covid disease, these women devotees has been refrained to pay obeisance at the Gundicha Temple.

Odisha FC partners with Youth for Sustainability for grassroots development