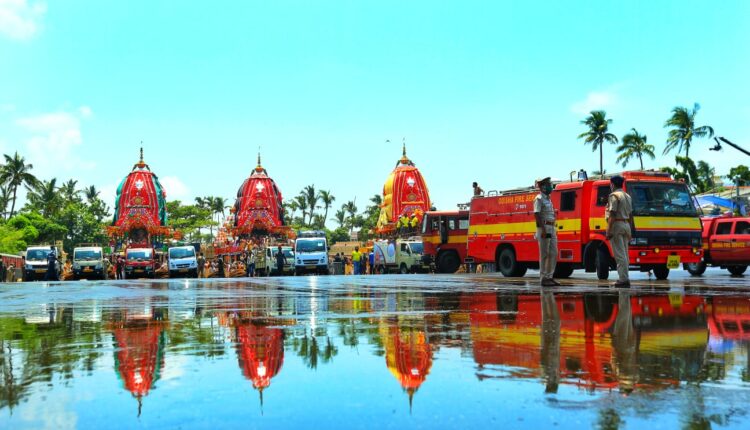 Puri: Lord Balabhadra, Devi Subhadra and Lord Jagannath returned to the sanctum sanctorum of the 12th century shrine here in a special ritual called Niladri Bije on Saturday, winding up the world famous Ratha Jatra in the absence of devotees due to COVID-19 pandemic. ”Niladri Bije” marked the concluding ritual of the historic car festival which had commenced on June 23 when the celestial siblings embarked upon a nine-day sojourn to Shree Gundicha Temple, regarded as their birthplace, through the Grand Road in three majestic wooden chariots in this seaside pilgrim town amid curfew and tight security due to COVID crisis.

After undertaking their return journey from Gundicha Temple in Bahuda Jatra on July 1, the Holy Trinity were adorned with glittering golden jewellery in a special ritual known as Suna Besha on July 2 while ensconced in their gigantic chariots parked in front of the Lions Gate of the Shree Jagannath Temple.

On Friday, the deities were offered a specially prepared sweet drink (pana) made of milk, sugar, cheese, banana, camphor, nutmeg and black pepper among others in a ritual called Adhara Pana.

As per the order of the Supreme Court, all the rituals of the Lords since the commencement of the historic Ratha Jatra on June 23 were performed by a limited number of servitors in the absence of any congregation in view of the pandemic. The servitors also underwent COVID-19 test and only those found negative for coronavirus participated in chariot pulling and other activities during the festival, held amid tight security.

Denied an opportunity to visit Puri to witness the mega event this year, crores of devotees across the world watched the proceedings on television by staying at home.

Chief Minister Naveen Patnaik extended his best wishes to all on the occasion of ”Neeladri Bije” and ”Rasagola Divas” on Saturday. The occasion is also observed as Rasagola Divas in Odisha as Lord Jagannath, who undertakes the journey outside the temple only with his elder brother and sister, pacifies the anger of Goddess Mahalaxmi by offering her Rasagolas.

Describing this ritual as a unique part of our great heritage, the chief minister has prayed to the trinity and wished everybody”s welfare through the sacred blessings of Mahaprabhu.

”Niladri Bije” rituals began around evening and the deities were escorted by the servitors in a procession called Goti Pahandi into the temple. Lord Sudarshan was first taken to the Ratna Singhasan, the bejewelled throne inside the sanctum sanctorum of the temple, followed by Lord Balabhadra and Devi Subhadra.

Before Lord Jagannath is escorted to the sanctum sanctorum, a traditional play is enacted between the servitors of the deity and his consort Goddess Mahalaxmi.

As per traditions, on Goddess Mahalaxmi’s order, servitors close the gate of the temple to prevent the entry of Lord Jagannath to the Srimandir in order to teach the Lord a lesson for not taking her along during his visit. Lord Jagannath is taken to Bheta Mandap, a special altar, where he meets the angry Goddess and offers her Rasagolas to pacify her.

The Goddess finally allows Lord Jagannath to enter into the shrine after much persuasion and the Lord is escorted to the Ratna Singhasan.

Puri district Collector Balwant Singh thanked the people, particularly the residents of Puri town, for cooperating with the administration in conducting the annual Ratha Jatra in a disciplined manner with all the restrictions of COVID-19.

Internationally acclaimed sand artist Sudarsan Pattnaik created a special sand sculpture on Puri beach on the occasion. “On the occasion of Niladri Bije, Lord Jagannath offers Rasagola to Goddess Laxmi. We celebrate this day as Rasagola Dibasa,” he said.