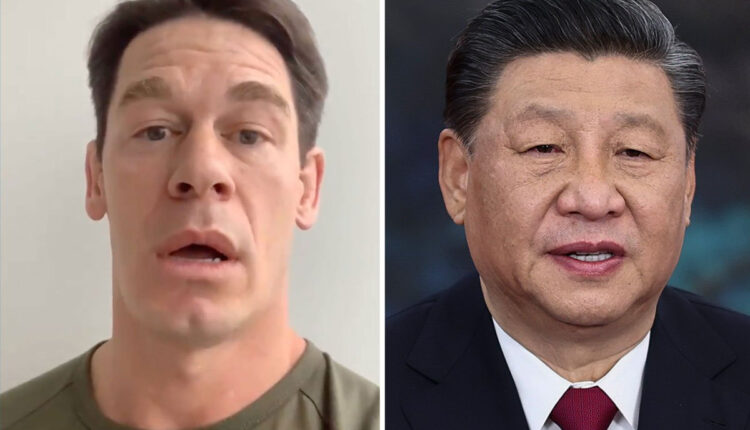 New Delhi: With John Cena, a wrestler turned actor apologising to the Chinese for calling Taiwan a country, the world has been reminded of the influence that China exerts on our pop culture, The Guardian recently reported.

This is hardly a recent phenomenon. The influence manifests itself in social, political and racial motives. A report by CNN has stated that the Tencent-backed sequel of the 1989 cult-classic ‘Top Gun’ has removed Taiwan’s flag from Tom Cruise’s jacket.

Elsewhere, Tibetan origins of a character has been entirely scrubbed by Marvel Entertainment largely because of the fear of offending the Chinese Communist Party according to a report by The New York Times.

It was therefore rare to see a director like Quentin Tarantino refusing to censor his movie ‘Once Upon a Time in Hollywood’ for the Chinese audience, prompting Chinese officials to cancel its release.

This state sponsored censorship is far more sophisticated than just removal of scenes. MGM Studio recently digitally transformed the villains of the movie, ‘Red Dawn’ into North Koreans from Chinese people, The Independent reports. This has led to calls to label Chinese investment sponsored movies so the world recognises propaganda when they see it.

A report by PEN America has revealed the Chinese government has a quota of foreign movies that can be shown every year, and competition for these positions is so aggressive that all probable missteps are avoided by producers for the fear of missing out. (https://pen.org/report/made-in-hollywood-censored) (https:/pen.org/report/made-in-hollywood-censored-by-beijing/-by-beijing/)

By influencing the stories that Hollywood tells, the Chinese Government can dampen call for changes or encouragement of resistance in the face of oppression. It can discourage and silence filmmakers that question or critique the Chinese Government and remove depictions of its human rights abuses. One of the ways in which China maintains this controls is by putting production studios on a blacklist, which can hurt production companies like Disney that have a slate of interests apart from movie business, such as stake in the Shanghai Disneyland Park, which cost over $5.5 billion to build and opened in 2016.

China also attacks specific individuals by ostracising them, refusing them future entry into China or declaring Chinese studios to boycott them or Central Propaganda Department censors evaluating movies in which they appear so that they become undesirable to any studio. Noteworthy examples of assumed-blacklisted icons of the cinema world include actress Sharon Stone, actress/singer Selena Gomez, actor Harrison Ford, and Richard Gere.

As a warning to others, in keeping with the well-established principle of Chinese government, “Mercy for those who apologize, strictness for those who protest”, the CCP supports “wrong-doers” to admit their “errors” to ingrain fear among producers. It was commonly established that Jean Jacques Annaud had been boycotted by the CCP for his participation in the film “Seven Years in Tibet” as the director. Yet when Annaud was chosen to direct the French-Chinese joint production Wolf, over a decade later in 2009, he released a letter on Sina Weibo declaring that he “never participated in any Tibet-related organization or association”, essentially apologising for his participation in Seven Years in Tibet.

The CCP has long viewed movies as a means not purely for entertainment but to convey acceptable ideas that strengthen a favourable image for Chinese supremacy. Hence, movies enjoyed by the audiences across the world are a direct result of influence and control by the Party. A prominent strategy for China’s soft power drive is summarised in a tenet, “Borrowing a boat to go out on the ocean,” that essentially refers to China’s gambit of surreptitiously placing CCP ideas or content into foreign media outlets to influence global audiences.

This axiom was in full display in 2015, when a research report brought to light that the state-owned China Radio International (CRI) had covertly bought almost 33 radio stations in 14 different countries across North America, Australia, and Europe, and structured their possession in such a manner that obfuscated the fact that these stations were in the end owned by the Chinese government.

With Hollywood now being used as a boat, studios currently incentivize steps to ensure upfront that content does not set off Beijing’s tripwires through engaging in a series of informal negotiations, conversations, and discussions designed to ensure they stay within the lines of content that Beijing will find acceptable.

In the initial stage, expert advice on what content will make the cut and what will not be obtained by studios through American and Chinese consultants, fixers, and their own people on the ground. Next, an informal feedback channel is established with Chinese officials and executives from both government-connected companies to state agencies, analysing their suggestions to decide which content is to be removed and what type of content may need to be emphasised.

Finally, there are windows for producers to appeal and work out details on behalf of their movies; opportunities that give producers a chance to resist censorship, but which also establish a give-and-take relationship between Hollywood studios and Beijing officials wanting to advance their political and social agenda.

It is high time Hollywood had an open and frank conversation about how to protect its creative independence and integrity in the face of foreign governmental control and propagandistic influence. If Hollywood studios do not push back against this influence with a unified voice today, it will only get harder in the future, and US soft power would inevitably decline.