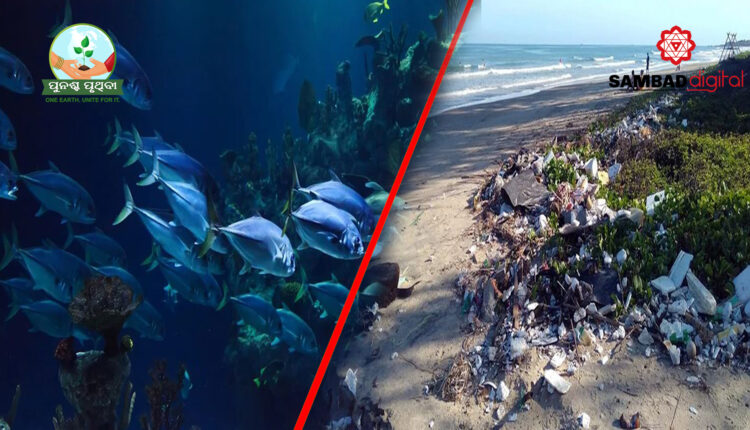 Plastic swirling around the world’s oceans have garnered a lot of media attention recently. But plastic pollution arguably poses a bigger threat to the plants and animals – including humans – who are based on land.

Very little of the plastic we discard every day is recycled or incinerated in waste-to-energy facilities. Much of it ends up in landfills, where it may take up to 1,000 years to decompose, leaching potentially toxic substances into the soil and water.

The researchers conclude that, although little research has been carried out in this area, the results to date are concerning: fragments of plastic are present practically all over the world and can trigger many kinds of adverse effects.

The study estimates that one third of all plastic waste ends up in soils or freshwater. Most of this plastic disintegrates into particles smaller than five millimetres, known as microplastics, and these break down further into nanoparticles (less than 0.1 micrometre in size). The problem is that these particles are entering the food chain.

Sewage is an important factor in the distribution of microplastics. In fact, between 80 per cent and 90 per cent of the plastic particles contained in sewage, such as from garment fibres, persist in the sludge, says the study. Sewage sludge is often applied to fields as fertilizer, meaning that several thousand tons of microplastics end up in our soils each year. Microplastics can even be found in tap water.

Moreover, the surfaces of tiny fragments of plastic may carry disease-causing organisms and act as a vector for diseases in the environment. Microplastics can also interact with soil fauna, affecting their health and soil functions.

In 2020, the first-ever field study to explore how the presence of microplastics can affect soil fauna was published in the Proceedings of the Royal Society. The paper notes that terrestrial microplastic pollution has led to the decrease of species that live below the surface, such as mites, larvae and other tiny creatures that maintain the fertility of the land.

Chlorinated plastic can release harmful chemicals into the surrounding soil, which can then seep into groundwater or other surrounding water sources, and also the ecosystem. This can cause a range of potentially harmful effects on the species that drink the water.

Generally speaking, when plastic particles break down, they gain new physical and chemical properties, increasing the risk that they will have a toxic effect on organisms. And the larger the number of potentially affected species and ecological functions, the more likely it is that toxic effects will occur.

Chemical effects are especially problematic at the decomposition stage. Additives such as phthalates and Bisphenol A (widely known as BPA) leach out of plastic particles. These additives are known for their hormonal effects and can disrupt the hormone system of vertebrates and invertebrates alike. In addition, nano-sized particles may cause inflammation, traverse cellular barriers, and even cross highly selective membranes such as the blood-brain barrier or the placenta. Within the cell, they can trigger changes in gene expression and biochemical reactions, among other things.

The long-term effects of these changes have not yet been sufficiently explored. “However, it has already been shown that when passing the blood-brain barrier nanoplastics have a behaviour-changing effect in fish,” according to the Leibnitz Institute of Freshwater Ecology and Inland Fisheries.

How do microplastics get into our water?

One of the main sources is our clothing. Minuscule fibres of acrylic, nylon, spandex, and polyester are shed each time we wash our clothes and are carried off to wastewater treatment plants or discharged to the open environment.

According to a recent study cited by Water World in 2016, more than 700,000 microscopic plastic fibres could be released into the environment during each cycle of a washing machine. This has not yet been studied in the case of handwashing, which is more common in developing countries, but the effects could be significant there as well.

Another study commissioned in the same year by clothing company Patagonia and conducted by researchers at the University of California, Santa Barbara, found that washing a single synthetic jacket just once released an average of 1.7 grams of microfibres.

Microbeads are solid plastic particles that typically range from 10 micrometers (0.00039 inches) up to 1 millimeter (0.039 inches).

Numerous countries around the world have introduced legislation to ban the manufacture of cosmetics and personal care products containing microbeads. Such laws have already been passed in Canada, Ireland, the Netherlands and the United Kingdom.

[This story is a part of ‘Punascha Pruthibi – One Earth. Unite for It’ awareness campaign by Sambad Digital.]